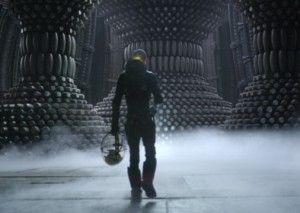 ‘Big things have small beginnings,” says Michael Fassbender’s Peter O’Toole-mimicking android at one point in Prometheus. It’s a wry observation on the way a single drop of blood is used to create much of the havoc that proceeds in Ridley Scott’s eagerly anticipated return to sci-fi, but it could just as easily refer to the way Scott’s Alien went from being a relatively low-budget B-movie with A-movie credentials to being the source of a world-conquering, multi-platform franchise that spawned some brilliant, so-so and some terrible sequels; two abysmal, mythology wrecking tie-in movies (Alien vs Predator and its equally bad follow-up); countless comic books and video games, and now, in Prometheus, one of this summer’s biggest blockbusters.

Yes, in case you’ve been hiding under a rock on LV-426, this is Scott’s “DNA-sharing” return to the Alien universe, and while the pragmatically minded director has never been particularly precious about his career-making breakthrough (in an interview with this paper nine years ago he told me he’d happily make another Alien movie if the script was good enough), his pre-release unwillingness to acknowledge Prometheus as a direct prequel is possibly designed to avoid Alien trainspotters from over-analysing all the ways the two films don’t quite synch up.

That said, Prometheus is most assuredly an Alien prequel, one that uses a tiny, fan-boy favourite moment from that first film – as well as unused elements from the late Dan O’Bannon and Ron Shusett’s much-reworked original script – as a jumping-off point for a much bigger, more meditative and fairly bonkers science fiction film exploring the nature of our origins. Set in the late 21st century, the film begins – after a creepy, stunningly shot prologue – on Skye.

There, the discovery of some cave paintings by Darwin-disputing scientists Elizabeth Shaw (Noomi Rapace) and her partner Charlie Holloway (Logan Marshall-Green) provide the final piece in a puzzle that convinces near-death trillionaire Peter Weyland (an unrecognisable Guy Pearce) to fund an expedition into space to search for our makers. Along for the ride are a rag-tag assortment of skeptical scientists and money-oriented cannon fodder, among them Charlize Theron’s coolly cynical CEO, Idris Elba’s gruff Texan pilot and Fassbender’s android, David.

It’s David who provides the most intrigue at first as he gets to wander the titular ship, improving his ancient language skills (not to mention honing his Peter O’Toole impression with screenings of Lawrence of Arabia) while the rest of the crew slumbers in hypersleep. That he’s not to be entirely trusted is, of course, a given thanks to the indelible impression Ian Holm made in a similar role in Alien. And yet, as with Lance Henriksen in both James Cameron’s Aliens and David Fincher’s Alien 3, Fassbender makes his non-human a fascinating and unpredictable character, not least because his very existence also underscores the playing-god theme of the plot.

Scott’s patience in setting out the world in these early parts of the film – or reintroducing us to it in some cases – also helps distinguish Prometheus from the cut-to-the-chase tendencies of most sci-fi action films, even if the clunkiness of the dialogue does not (the script was co-written by Lost alumnus Damon Lindelof and Jon Spaihts, who wrote the recent sci-fi clunker The Darkest Hour). That it lacks some of the blue-collar authenticity of the original’s “truckers in space” approach, however, is a minor niggle given how brilliantly Scott uses his massive budget to visually expand a world we only got a small glimpse of last time.

It’s certainly a thrill to see those biomechanical HR Giger designs again on such a huge scale, particularly as they dwarf the characters while they explore the cavernous sets searching for the evolved species they believe created humanity. Here, Scott’s decision to explain the origins of the so-called “Space Jockey”, whose giant fossilised form John Hurt and co stumbled upon in the 1979 movie, provides the film with its main narrative thrust, but the film’s real selling point is Scott’s ability to recapture some of the nerve-shredding fear that defined Alien without simply replicating that film’s signature shocks. There are variations on the iconic “facehugger” and “chestburster” scenes, but crucially, they’re not replicas of those scenes. Instead Scott finds new ways to ratchet up the tension, with the bloody and inventive alien birthing scene one character goes through being particularly gnarly and exhausting to watch – but in a good way.

Despite the film making you feel as if you’ve been put through the wringer, though, for all its big ideas it’s not quite as revelatory as one might have hoped, with an ending that refuses to tie the film up with the original in a fundamentally important way, leaving the door open for a sequel. That might prevent it from being an instant classic, but for its duration, Prometheus is immensely satisfying.