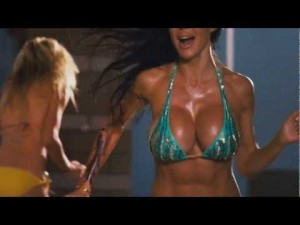 It’s a sink or swim moment for the filmmakers behind the sequel to “Piranha 3D.”

Combining a silly, self-aware sensibility with over-the-top gore, the original comedic horror film starring the likes of Richard Dreyfuss, Christopher Lloyd and Elizabeth Shue as townsfolk fighting off prehistoric flesh-eating fish became a just-add-water cult hit when it was released two summers ago opposite more mature fare such as “The Expendables” and “Eat Pray Love.”

Dimension Films, the division of the Weinstein Co. that produces horror and sci-fi fare, quickly christened a sequel with the tongue-in-cheek title “Piranha 3DD” — yes, that’s pronounced double-D — in hopes of riding the same wave of success as “Piranha 3D,” which reportedly cost just $24 million to make but reeled in more than $83 million worldwide.

The original also chomped off an unexpected amount of guilty-pleasure acclaim, not just from horror blogs, but from actual mainstream critics. “Piranha 3D” was called “bloody watchable trash” by Entertainment Weekly’s Owen Gleiberman, “’Jaws’ without the art” by Rolling Stone’s Peter Travers and “cleverly gory” by Christy Lemire of The Associated Press.

“I don’t even know if we can top it,” lamented sequel director John Gulager, whose horror film “Feast” was the subject of the Bravo moviemaking documentary series “Project Greenlight” in 2005. “I don’t think that was totally our goal. We just wanted to be different. They had Academy Award-winning actors and stuff. We just wanted to have our own separate story.”

Curiously, Dimension isn’t screening “Piranha 3DD” in advance for critics, not necessarily a very positive indicator of a film’s quality.

The film, which opens Friday in theaters and through on-demand video services, was originally scheduled to debut last October, but Gulager said production was delayed so the cast and crew could film in warmer weather at the Jungle Rapids waterpark in Wilmington, N.C. The filmmakers admit that the premise is outlandish but the setting was too fun to dismiss.

Though the previous “Piranha,” an overhaul of the 1978 movie produced by B-movie king Roger Corman, caught audiences’ attention, it wasn’t as successful as other films that year that more closely followed horror trends, like faithfully remaking a classic (“A Nightmare on Elm Street”), employing amateur trickery (“Paranormal Activity 2”) or torturing victims (“Saw 3D”).

“There are always patterns and fads in horror,” said “Piranha 3DD” screenwriter Patrick Melton. “Right now the found footage and ghost stories are doing really well. That’s in. You can only have three or four successful movies in that subgenre before Hollywood does it to death, so having little bumps in the road along the way like ’Piranha’ keeps it fun.”

If moviegoers and critics think the latest “Piranha” is as much fun as the first one, another attack could be around the corner. Matthew Stein, the film’s executive producer who formerly worked as a production executive at Dimension Films, believes the sequel’s waterpark setting raises the drama and leaves plenty of space for the piranha to prowl in the future.

“If the studio were to call me and greenlight ’Piranha 3DDD’ or ’Piranha 4D’ or ’Piranha XL’ or whatever they wanted to call it, I’m there,” said Stein. “I think that would be a lot of fun. Ultimately, I think it would be a creative and economic decision. I can tell you that there are a lot of ideas floating around about the mythology of our piranha.”