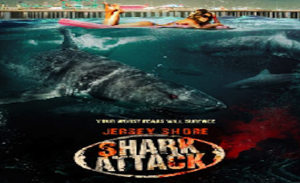 It’s one thing for Gov. Chris Christie to urge people to “get the hell off the beach.” It’s another for Paulie Walnuts of “The Sopranos” to shout into a megaphone for everyone to flee the Jersey Shore before they’re eaten.
The movie “Jersey Shore Shark Attack,” premiering June 9 on the SyFy channel, is a mash-up parody of guido culture and summertime B-movie horror tropes. It features an odd assortment of actors: Paul Sorvino as the mayor, the aforementioned Tony Sirico as a boat captain, Joey Fatone as himself, and “Jersey Shore”‘s own Vinny Guadagnino as a reporter on the scene.
As for the plot, the title pretty much sums it up, but according to a news release, the film occurs during the Fourth of July weekend as “rare swarms of sharks are converging due to illegal underwater drilling.” The sharks begin to devour residents one by one. A group of Shore regulars open fire on the fishes while maintaining a healthy tanning regime