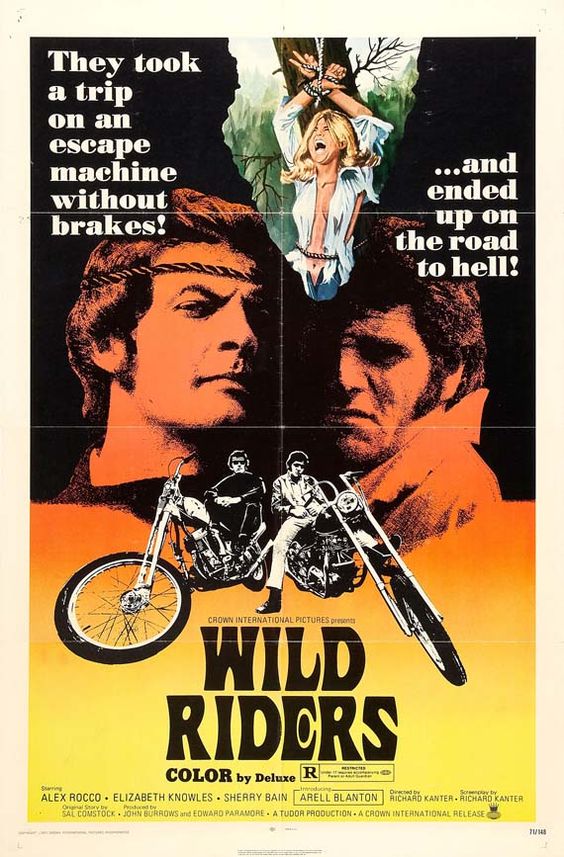 This low budget b-movie is very much on the sleazier end of the exploitation spectrum. It was released by those dependable purveyors of good time schlock, Crown International Pictures. In advance, this one looks like it’s another in the biker film cycle that followed in the wake of the big box office success of Easy Rider (1969). But despite its title, poster and two central characters, there is actually little in the way of biker action to be found here. Instead, it is a very early example of a type of movie which would become more popular as the 70’s went on and would go on to be one of the most controversial sub-genres, namely the house invasion movie. In this respect, Wild Riders is quite clearly ahead of the curve and this does make it interesting.

It’s about two biker thugs, who are exiled from their gang for killing a girl, they go on to conduct a house invasion of an affluent suburban home; their victims are two unfortunate women. From the outset this one makes it clear how it means to go on with a savage opening scene where a girl is nailed to a tree. Later there is more nastiness in the form of rape, murder and verbal abuse. It crescendos with a violent finale that was not only satisfying but also very funny. Despite how it may sound it’s really not as disturbing as most films of this type that followed it but it definitely has a mean streak to it quite a bit of the time. It was after all refused a certificate in the UK when initially released and then re-refused again when it was submitted for home video in the late 80’s. Definitely one of the tougher films released by Crown and one well worth checking out if you enjoy 70’s exploitation.