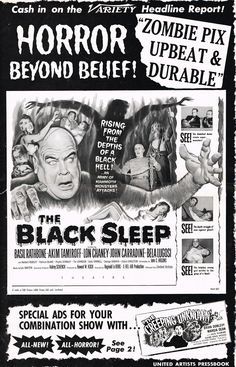 Sir Joel Cadman (Basil Rathbone), a mad scientist, kidnaps his victims and cuts open their brains in an effort to discover a means to cure his wife’s brain tumor.

Okay, so you have a 1950s mad scientist story about a guy doing experimental brain surgery that results in some serious mistakes. That alone could probably make a pretty decent horror film — who is opposed to seeing brain dead lobotomy patients lumbering through a dungeon?

But, really, this film could not have failed if it tried. Besides Rathbone, it features Bela Lugosi, Lon Chaney and John Carradine. They could have stood around and played hackey sack and I would still watch it.

Paul Corupe makes an interesting observation about this film’s role in history. He notes that on the surface, Cadman is your typical 1930s mad scientist, saying things like, “In the interests of science, anything is justified.” But underneath that, he is a 1950s scientist, a transitional figure who does experiments not just because he can but because he is trying to save a life — he is one of the very first mad scientists we can feel sorry for, possibly. The only earlier example Corupe offers is from “The Ape” (1940).