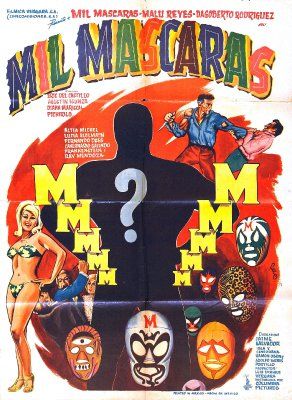 Máscaras also starred in a series of 20 luchador action films beginning with his self-titled debut in 1966 at age 24. In 1966, Mexican movie producer Luis Enrique Vergara was looking for a new “enmascarado” to star in his wrestling/horror movies which were then the rage of Mexican cinema. Mil Máscaras was the first Lucha Libre personality that was created specifically to be a movie star, since his whole persona and flashy look was designed initially for the movies. (His real life wrestling career followed and grew out of the excitement generated by his film appearances.)

Máscaras at a red carpet event
Máscaras at a red carpet event
Vergara’s two regular movie stars had suddenly become unavailable. Santo had walked out on him over a contract dispute, and Blue Demon was injured unexpectedly and would require a prolonged time-out. Not wanting to stop making his successful cinematic quickies, Vergara decided to transform Lucha Libre newcomer Mil Máscaras as the star of his next two movies. Mil began a movie career that has continued to this day, appearing in a total of 20 Mexican horror/wrestling/action films.

The first film, simply entitled Mil Mascaras (1966) was shot in black & white, and made Mil out to be a sort of super-hero. The film gave Mil Máscaras a comic book-style origin story, which seems to have been somewhat swiped from the then-popular Doc Savage pulp novels that were selling very well in science-fiction bookstores in the mid-60’s. According to the script, Mil was an infant who was found clutched in his dead mother’s arms in a war-torn area of Europe during World War 2 and was sent to an orphanage. A group of scientists (not affiliated with any particular country) adopts the boy, secretly using him as a guinea pig, subjecting the child to an intensive regimen of physical exercise and mental training as he matures.

When he reaches adulthood, Mil is something of a superman (although without actual super powers); both his mind and his body have been developed to perfection. The scientists then send him out into the world to help downtrodden people everywhere, to fight criminals and to right wrongs, and just basically help make the world a better place.

The plots of the first two films were rather lackluster. In both Mil Mascaras (1966) and its sequel Los Canallas (also 1966), Mil gets to fight a rather ordinary gang of thugs and a crooked fight promoter who are bullying the locals in some backwater burg in Mexico. Mil’s second film Los Canallas and all of them thereafter were shot in Color.

Federico Curiel directed Mil’s next two films in 1968, both of which feature American horror star John Carradine as a bad guy. Mil’s missions were becoming a bit more meaningful by this time. In Enigma of Death, Mil faces off against Carradine who plays the leader of an underground Nazi organization (who disguises himself as a circus clown!), while in Las Vampiras, Mil goes up against a secret cult of female vampires led by a very manic Carradine.

In 1970, Curiel directed Mil in two of his team-up movies. The Mummies of Guanajuato teamed Mil up with both Blue Demon and El Santo in what became the highest-grossing Mexican wrestler film of all time, pitting the three enmascarados against a group of re-animated mummies.

The Champions of Justice (also 1970) saw Mil in action with fellow wrestlers Blue Demon, Tinieblas, El Medico Asesino and La Sombra Vengadora (who all joined together as sort of a super-team to fight monsters, mad scientists, criminals, evil dwarves or whatever else crossed their paths.) The producers employed a gaggle of masked midget wrestlers in a number of their luchador films in the 70s.

Over the next few years, a number of other team-up movies were made, most co-starring Mil Máscaras, who by this time was becoming the King of the Team-up Movies. Champions of Justice Return (1972) was very similar to the first Champions film, only with El Fantasma Blanco sitting in for El Medico Asesino, El Rayo de Jalisco replacing Tinieblas, and El Avispon Escarlata replacing La Sombra Vengadora. (Mil didn’t appear in the third and final “Champions” film because it would’ve involved traveling to a foreign country where it was filmed.)

However, in 1973, he teamed up again with Tinieblas and El Fantasma Blanco in two more films, Macabre Legends of the Colony and The Mummies of San Angel (which both resemble “Champions Of Justice” films, in spite of the Blue Demon’s conspicuous absence from the casts). Theft of the Mummies of Guanajuato (1972) teamed up Mil with the Blue Angel and El Rayo De Jalisco.

Mil then co-starred with super-star strongman Sergio Oliva in Black Power (1973). He fought alongside the then-famous Superzan in Vampires of Coyoacan (1973) and later joined forces once again with El Santo and Blue Demon in 1977’s Mystery in Bermuda, which most Mexi-cinema fans consider to be the last real entry in the then fading Mexican wrestling/horror genre.

Mil also appeared in a solo movie of his own, A Rose in the Ring (1972) and years later, he even teamed up with Santo’s son El Hijo del Santo in The Lawless Frontier (1983), making Mil Máscaras the only Mexican superhero to ever co-star with both Santos, father and son. In the late 80’s, Mil appeared in two more wrestling films, La Verdad de la Lucha and La Llave Mortal.

Mil’s film career lay dormant after 1990 for 17 years, but he more recently resumed appearing in movies. In 2007, Máscaras starred in Mil Mascaras vs. the Aztec Mummy (also known as Mil Mascaras: Resurrection),[10] the first lucha film featuring any of the so-called “Big Three” stars of the genre (Máscaras, Blue Demon, Santo) to be produced in English. The film screened at festivals around the world garnering awards and award nominations along with positive critical reviews.[11][12] The film enjoyed almost continuous popularity and publicity for several years after its debut, including two magazine cover articles as late as 2012.[13] He also appeared in a 2008 film entitled Academy of Doom, and a 2015 film called Aztec Revenge.