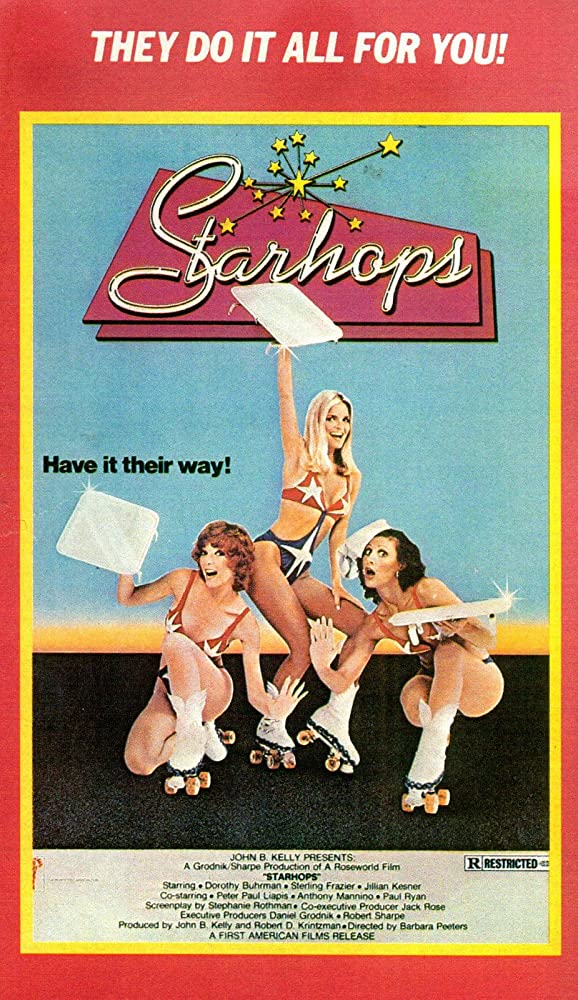 Now here’s an interesting by-product of the 1970’s… the “feminist” drive-in exploitation fare, which featured female protagonists making their way in a man’s world. Courtesy director Barbara Peeters (BURY ME AN ANGEL) and screenwriter Stephanie Rothman (GROUP MARRIAGE), both specialists in this mini-genre, the conventions of these films are the same, however because the protagonists are women, there is kind of a reverse stereotype. In other words, it’s okay if women take their clothes off, as long as they’re being directed by women.

This story is pure corny sex fluff (but with little sex): a trio of enterprising gals set out to save their fledgling drive-in restaurant despite all obstacles. Because this is a drive-in movie with a lot of wah-wah pedal soundtrack and male pigs with bad clothing, you know that these girls aren’t taking the Sally Struthers correspondence course on business. They take advantage of their sexuality to get their way in a corporate man’s world… always on their terms, yet still don’t go ALL the way.

Angel and Cupcake (great names, eh?) use their feminine wiles to get a business loan to take over the restaurant once boss Jerry flips his lid. With the help of Danielle, who can make cheeseburgers into French gourmet, they are in business, until… …man-child millionaire Carter Axe wants to take over the property. He even gets his spoiled son Norman to work there to sabotage the place. What follows would not garner a Thalberg award anytime soon, but still this is amiable schlock despite the insane overacting, and the sitcom-level screenwriting (I’m not kidding- Stephanie Rothman must have had “Three’s Company” on in the background while typing this; there is a blatant lift from one of the show’s sexual innuendoes).

Finally, STARHOPS is of a subgenre of late-1970’s mosaic films which celebrate the working class (CAR WASH, LUNCH WAGON, etc.), before the honest Johns onscreen were replaced by robots and frat boys. One begs the question, “Where are they now?” The restaurant at which this was shot (it’s probably a Starbucks now), and the people in the cast (except Dick Miller)– all doe-eyed hopefuls whom we once identified with, for in that immortal decade of cinema, the screen was actually filled with “real people”.