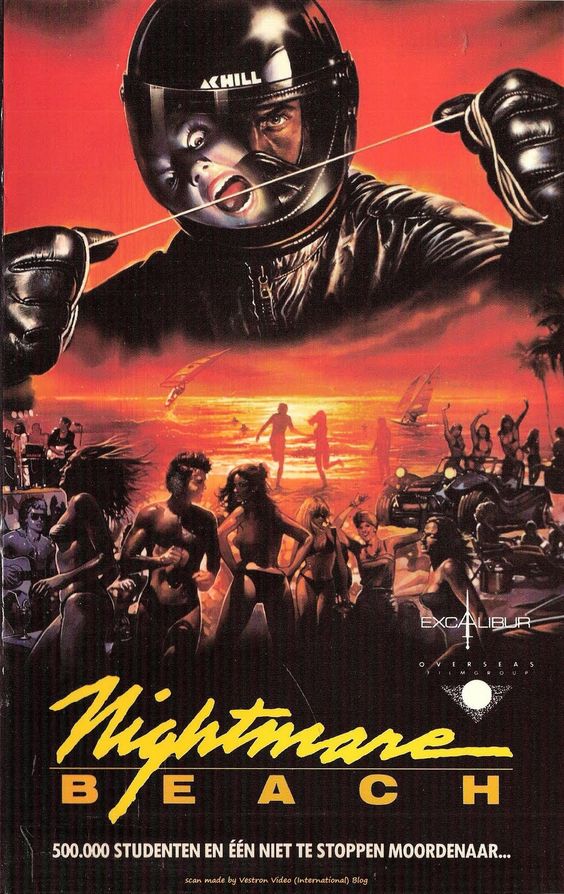 Nightmare Beach is known as a Giallo in some circles, but I think it’s quite clear that the main inspiration has come from the overpopulated slasher genre. I’m not a big fan of this type of film, but Nightmare Beach succeeds where other slashers fail because it doesn’t try to be anything that it isn’t, and the focus is always on the dumb teens at the centre of the story and the over the top murder scenes. The movie seems to take a lot of influence from Lamberto Bava’s ‘Demons’, as trashy eighties metal is mixed in with just about every sequence…and was that the logo for said film that I saw on the back of the biker’s shirts? The plot focuses on the annual Easter celebration known as ‘Spring Break’ at a certain (nightmare) beach. A biker by the name of Diablo was put to death by electric chair after supposedly being framed for murder by the local officer, and now the authorities have a problem on their hands as the biker going round electrocuting people threatens the business boom.

Umberto Lenzi’s career peaked in the late sixties to early seventies with Giallo classics such as Seven Blood-Stained Orchids and several awesome crime flicks such as Almost Human. It’s safe to say that his career went downhill in the eighties when he started to imitate the likes of Lucio Fulci and Ruggero Deodato with enjoyable yet trashy flicks such as Cannibal Ferox and Nightmare City. While Nightmare Beach is nothing like as good as Lenzi’s earlier efforts, and certainly doesn’t represent a return to form, at least this film is enjoyable throughout, and personally I didn’t care too much that I know the director is capable of better. As you might expect, the acting is truly diabolical, with nobody except cult icon John Saxon coming out of the film with any credibility; although Saxon does lift the entire production with hard man role. The electrocution style murder scenes are well shot, and while they don’t all look particularly realistic; and don’t feature much in the way of gore, it’s nice to see a slasher that doesn’t just feature knife killings. The mystery surrounding the identity of the murderer is never too well explored, and by the end there really is just one suspect left. Overall, this film is bound not to please everyone; but it’s a lot of fun to watch, and if you can put with trash films – this one is well worth seeing!