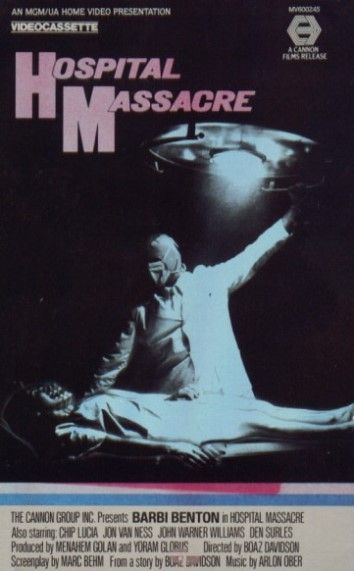 Hospital Massacre seems like one of those movies that an alien from a different planet would make about humans. So many characters behave in such ridiculously bizarre ways that no one seems like a real person. It’s probably best to turn off your mind before going into this one and just rolling with it.

The story itself might make zero sense, but it seems as if it’s just a coat hanger to hang a series of gory, imaginative death scenes on and those scenes are certainly memorable. It’s never terribly gory (in fact, it tends to cut away before it shows too much most of the time), but the scenes themselves are unlike anything you’ve ever seen. Watch a nurse turn a corner and come face to face with the killer at the end of the hall who’s walking towards her with a sheet stretched out in front of him. Like most of the film, it’s hard to tell if this is dreamlike and creepy or incredibly hilarious.

Much like the same year’s Halloween II, there are only a handful of patients in this entire hospital and the people in charge must be trying to save money on electricity, because there are so many dark corners and hallways everywhere.

Barbi Benton isn’t half bad in her meager role which just consists of her looking scared, angry, or hysterical. At least when she isn’t being subjected to hysterically gratuitous nude examination scenes.

I’m not sure what Hospital Massacre was intending to be, but it sure turned out fun.