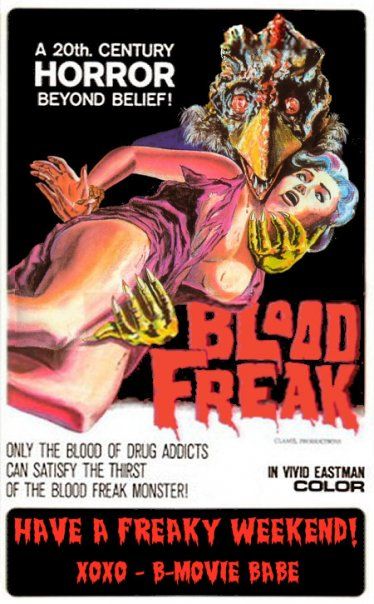 After hearing about Blood Freak for years, after preparing myself by collecting over two hundred of the worst movies ever made, after nearly resigning myself to paying a fortune for a copy, I found Blood Freak sitting on a shelf with a cute little green price tag, biding its time, waiting to pounce.

I wasn’t ready for this. Read all the other comments and realize that they’re not exaggerating in the least. WORST movie ever made? No, that’s still got to be Night of Horror. Blood Freak calls for a category not yet invented – the sheer glorious dancing-with-the-angels whack flakiness of Godmonster of Indian Flats or Troll 2, combined with the absolute ineptitude of Night of Horror, Weird World of LSD, or Broadway Jungle. And then add something more, an X factor, the ability to send you off the couch and onto the Karistan wheezing like a busted calliope, like the head of Hitler mugging it up in the back seat in They Saved Hitler’s Brain, or the immortal. “The natives call it – Tabanga!” in from Hell It Came.

Yes, it’s about mutant turkeys, good Bible preaching, a hair farm named Herschell, and balding cracker dopers, but Blood Freak goes so much further. It has the rare quality of twisting away from you and running off in a different direction, whenever you think you’ve got it pegged. At half a dozen points in the movie you’ll have yourself totally convinced that this is a send-up, that the crazed lounge-lizards-for-Jesus narrator is smirking and winking at you. Then a throat gets slashed, a leg gets sawn off, and you realize that, no, the mutant turkeys that created this farrago are SERIOU