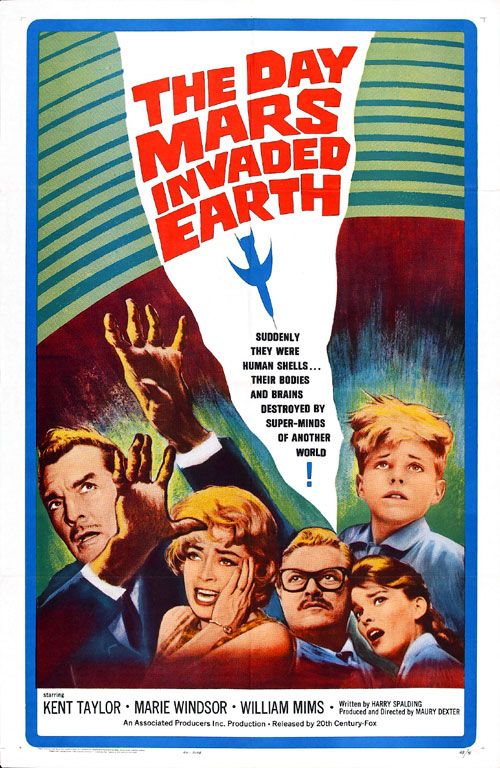 It was a very interesting coincidence that I watched this film when I did–right after seeing “Ramona” (1936). That’s because Kent Taylor was one of the stars in both films. However, here in “The Day Mars Invaded the Earth”, he was late in his career–and in a lot less prestigious film! Now this isn’t to say that sci-fi films of the period are all bad–they can be great fun. But they don’t have the huge star power of this earlier film–when Taylor was on his way to being a major Hollywood star (though, it never exactly came to be–though he did appear in a huge number of films–mostly Bs). In addition to Taylor, Marie Windsor (who played a great film noir ‘dame’ in the 50s) co-stars as his loving wife–but she looks quite different with her blonde hair and 60s hairstyle.

The plot of this sci-fi/horror film is very familiar and reminded me of many sci-fi and horror films of the day. A man (Taylor) is working on a project that has sent a probe to Mars. Soon, weird things start happening to him and his family–as Martians come to Earth disguised as him or family members. It seems they do NOT want humans bothering them.

This is all very, very familiar territory but with one twist. The ending was NOT at all predictable and was pretty off the wall. Otherwise, a decent film for those who love the genre. Not a great film–but worth your time and it makes do quite well with a small budget.