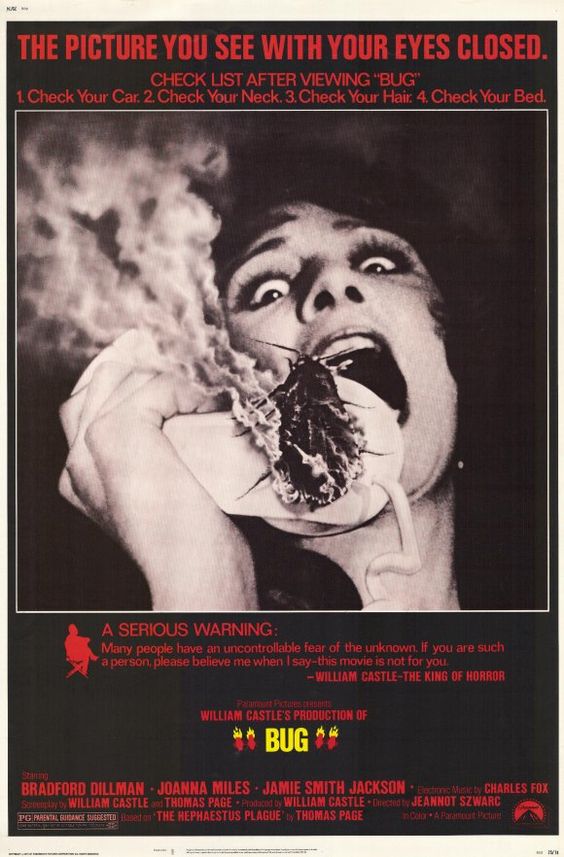 Viewers who may be having some insect problems in their own abode may feel a bit better about their domestic situation when they see what the residents of a small California desert town have to contend with, in 1975’s “Bug.” After a seismic event releases the titular nasties from deep underground, the ugly, beetlelike creatures start making trouble, setting fires wherever they go by rubbing their chitinous rear antennae together. And then things get even more problematic, when a balmy biology teacher (excellently portrayed by Bradford Dillman) decides to cross the “Firebug” with the ordinary domestic roach! OK, first let me say what “bugged” me about this film. It is occasionally slow moving and, other than Dillman’s character, there is no other character of any depth or interest to speak of. And since even Dillman’s character goes bonkers halfway through, there’s really nobody for the viewer to root for or identify with. There is, however, plenty of good news. The film IS creepy as can be (roachaphobes, be forewarned!) and features an eerie electronic score by Charles Fox and interesting directorial touches from Jeannot Szwarc. And those bugs really are something! I could not tell half the time if I was looking at a genuine insect or the result of some special FX wizardry; probably a cunning mixture of the two. And the four bug attack sequences, three of them on women, are gruesomely effective and well done. A tip of the hat to producer and co-writer William Castle, who, in this, his last film, demonstrated that he still knew how to deliver a gripping entertainment. (Come to think of it, the Firebug almost looks like a pint-size Tingler!) My buddy Rob has astutely pointed out to me the picture’s skillful use of establishing shots, prolonged silences, “disturbing imagery” and “unnerving stillness,” and I must admit that a repeat viewing revealed the film to be not so much slow as deliberately paced. Ending on as bleak a note as can be, the picture will most likely send viewers off to the hardware store to pick up a preventive pack of Combat!