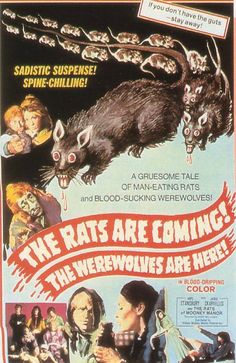 Most people seem to hate this movie and basically anything associated with director Milligan. It’s slow moving, has awful make-up and lighting and a huh (!?) chaotic ending, but some of the performances are actually pretty good, the overkill melodrama is hilarious and it’s kind of interesting…for awhile.

In England, poor Gerald (Ian Innes) is in for a treat when he visits the family mansion of his new bride Diana (Jackie Skarvellis). Pa Mortimer (Douglas Phair) is a bedridden grouch, older sister Monica (Hope Stansbury) is a childish psycho, mom Phoebe (Joan Ogden) is a miserable mess and retarded brother Malcolm (Berwick Kaler) is kept chained-up in a secret room. Only the older brother seems normal. Something isn’t right, as the son-in-law soon realizes, but his wife won’t let him leave. Yes…they all turn out to be werewolves guarding the family secret.

The older insane daughter torments the chained up brother by insulting him and beating him with a belt in some outrageous out-of-place scenes. She also buys a cage full of flesh-eating rats from a grimy vendor and in a shocking, standout scene, nails a REAL rat on a board! The whole rat idea has no relevance to the plot and was added by the director to bulk up the running time and cash in on the success of WILLARD, so that (sort of) explains the title.