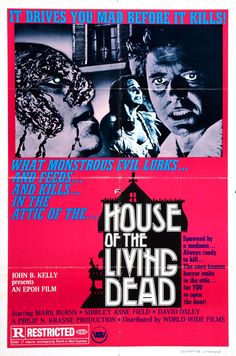 Over a long career (1968-99), this was one of only three cinematic works that director Austin made (all in the early 70’s)–usually he did TV work–and in fact, production value-wise, it seemed like made-for-TV fare. Basically a vineyard/plantation with black, witchcraft-practicing slaves, and the owner harbouring a dark secret: A genius twin brother, who was discredited in the medical community to begin with, and then, since an almost-fatal brain injury suffered in an accident a year ago, basically insane and confined to the mansion’s attic.

It was decently made and, as late-night fare, perfectly acceptable. It could have been made a lot better in more capable hands. The underlying ideas were very interesting, though only decently carried out, and the climax was completely predictable, though no less enjoyable. I got my copy very cheaply, in Mill Creek’s 50-pack ‘Nightmare Worlds’, and it’s watchable, no better, no less.