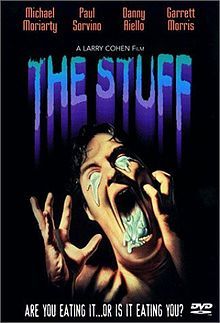 Writer/Director Larry Cohen seems to make pictures that bear some important philosophical/social thread to them very often against a background of absurdity, sheer silliness, and subtle good performances. directions, etc… The Stuff is no exception and while nowhere as good(as far as I am concerned) a Q or It’s Alive – The Stuff has a lot going for it. Oozing yogurt-like substance(alien source perhaps) is being manufactured and sold and becomes a million dollar plus commodity. Trouble is it has amazingly devastating after-effects. While The Stuff is one of Cohen’s less serious films in style, it is profound if you look for it to be. It makes fun of crass consumerism, retailing, marketing, the army, the government, big business, and so many other things – all with a humorous slant but with a cutting undertow. Michael Moriarity again stars as the lead in a Cohen film and as always gives a pretty good performance. He always gives the films an air of credibility. The rest of the cast is good at playing it as half-serious with Garrett Morris standing out as well as Paul Sorvino as a macho military man. And what about the white stuff? Well, it is creepier than you might expect as it can do all kinds of things. And the saddest part is that while the story is heavily exaggerated – I found it to be credible given more realistic criteria. Cohen hits the mark on the nature of 20th century consumers and beyond.