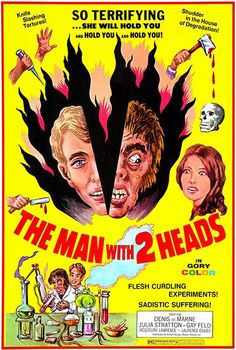 It’s easy to mix up Andy Milligan’s THE MAN WITH TWO HEADS with THE THING WITH TWO HEADS, a cult movie that came out the same year about a two-headed monster. This film’s two-headed creature is a metaphorical one; the film is actually Milligan’s version of the Jekyll and Hyde story, and like most of his work from the era (e.g. BLOODTHIRSTY BUTCHERS) it’s a period piece that was shot in London. It’s also very dull.

Although the film is more coherent than most of Milligan’s fare, the truth is that it’s not very good. It’s not a long film but the pacing drags out endlessly nonetheless. There’s the usual combination of slow and talky moments, amateur theatrics-level acting from the unknown cast members, and a few moments of high ham and cheesiness. Milligan can’t resist throwing some bloodshed into the mix, which I’m all for, but his films are just too obviously hampered by their low budgets to make much of an impact except in the lowest of cult circles. You can go ahead and watch just about any other version of the Robert Louis Stevenson story and find it more entertaining than this one.