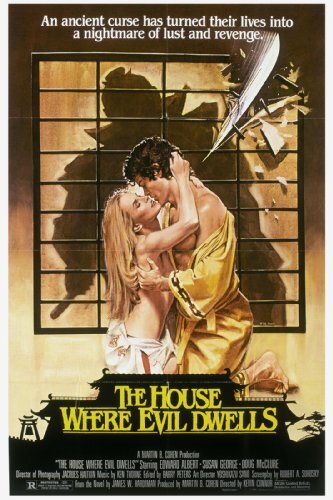 Over a century ago a samurai kills his wife and her lover before committing suicide, so it moves to modern times where a Western family moves in to the home where it happened. Soon they find themselves under the influence of these spirits. After a beautifully presented opening consisting of tragedy, this haunted house tale just never gets off the ground becoming quite uneventful (as it seems to lull about) with its lightly scripted narrative and randomly silly supernatural circumstances (rambling crabs?!). Even from what develops, it shows a real lack of reasoning about certain characters’ judgements. Its frenzied finale is risible, but effectively executed. However at least it was brave to go out on a powerfully bleak note. Director Kevin Connor resourcefully sets it up with certain crispness thanks to the lyrical shape of the camera-work and the pacing is rather restrained with its slow-burn styling. The exotically picturesque Japanese backdrop projects another dimension to the fold. But there’s no disguising its formulaic nature and stage-bound set, despite its change of culture and folklore. Although I did like how the malevolently restless spirits manifested, waltz, conspire and interacted with the occupants of the house. Where they went about trying to repeat the re-enactment of their own harrowing ordeal. How they go about pulling their stings is toying around with possessions, manifestations and causing a mess by throwing things about. The cast is dependable, but sometimes look a bit out of sorts. Susan George remains pleasing, but Edward Albert and Doug McClure (who had work with director Connor many times before) are practical with their performances. It should have promised much more than what transpired, but this handsome production consisted of strange ideas amongst its standard clichés.