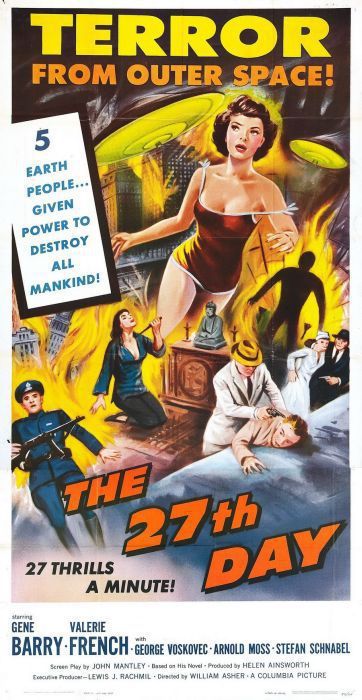 THE 27th DAY replaces the cliched threat of aliens blasting us lasers with the chilling fact that a handful of earth people have the power to destroy the world. Of course, one is an upright American citizen, the ohter is a robotic Russian soldier, etc, etc. It gives a wonderful view of how these people would be feared, treated and simply how they would react. My only squabble with the film is that the filmmakers didn’t hide their low budget well enough. An example there is a scene where movie characters address the United Nations. The close up of the characters is done in a well lit studio, the cutaways of the UN assembly are handheld and grainy.

Gene Barry and Valarie French are wonderful leads. Look for Roger Corman regulars Paul Birch (NOT OF THIS EARTH) and Mel Welles (Gravis Mushnick from LITTLE SHOP OF HORRORS) in cameos.