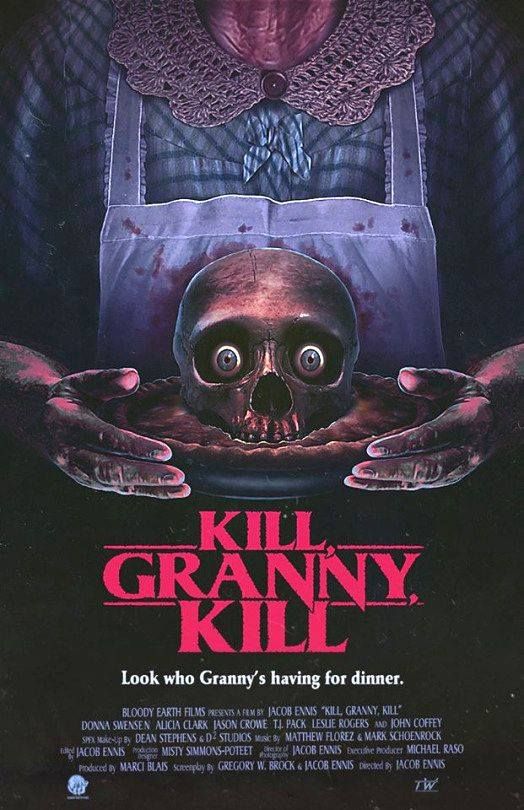 Mildred (Donna Swenson) is a nice old lady who has a few skeletons in her closet, quite literally. She is very religious but seems to overlook the commandment “thou shalt not kill,” and I’m not too sure that human flesh was considered clean meat. Her weapon of choice is an ax, and she always makes sure to wear a poncho so no blood gets on her clothes. Donna Swenson does an amazing job with this character, creating a combination of Miss Daisy (Driving Miss Daisy), Hannibal Lecter and Betty White all rolled into Mildred. What’s really impressive is that this is her first movie. Her grandson Jace (TJ Pack) looks after her and also assists with the killings and preparation of the bodies. At first I wasn’t sure if he was in on it, and that’s because the emotions portrayed by the actor come off so well, like the stuff his “Nanna” does is just routine and normal. He’s just laid back and ready to help in any way possible.

Abby (Alicia Clark) sees an online ad for a caretaker position and is interviewed by Mildred at her house out in the country. She seems nice enough but she does have a few rules: No swearing, no obscene TV programs, and no fornicating under her roof. But with her boyfriend Daniel (Jason Crowe) constantly asking for sex, what will happen if Abby does not follow Mildred’s rules? Both Alicia Clark and Jason Crowe delve deep into their characters, and the relationship they have appears genuine. You can truly sense the frustration of Abby trying to respect Mildred’s wishes, and you get a few laughs from some comments and actions by Daniel being the annoying boyfriend, tempter and tease.

This movie could have ended no other way. It was not predictable and it continued with the humor and shock value throughout the movie. My jaw was dropped and then ensued laughter.