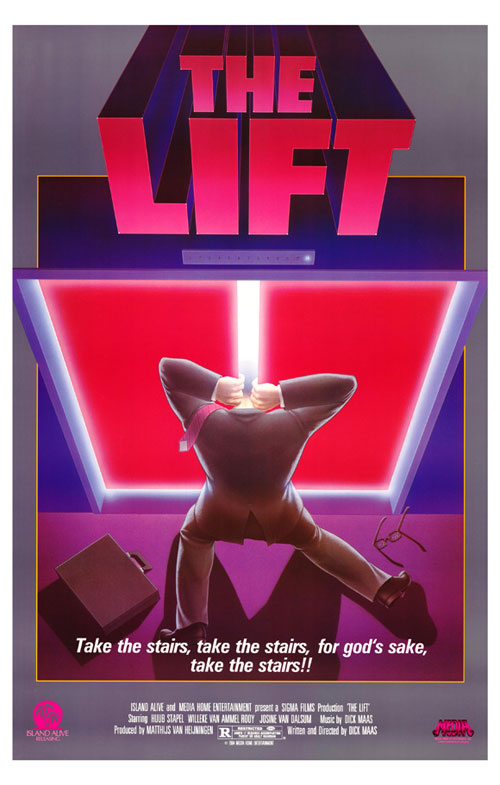 In a high rise office building in the Netherlands, an elevator repairman named Felix Adelaar (Huub Stapel) is busy trying to solve a mystery. The elevators in this place are now functioning improperly, incapacitating passengers if not killing them outright. Could the cause be some sort of human error, or is something supernatural going on? Felix works the clues in the company of an aggressive, sassy reporter, Mieke de Beer (Willeke van Ammelrooy).

Writer & director Dick Maas (“Amsterdamned”) deserves some credit for treating his premise with some measure of restraint. Therefore, it won’t be to all tastes. It admittedly comes up a little short in the thrills department, with a slow pace and a talky script. Yet, there are fun moments, such as when an unfortunate security guard is decapitated by an elevator. Also, Stapel is an appealing working-class, Everyman sort of hero, and he has some chemistry with the striking van Ammelrooy. They receive able support from players such as Josine van Dalsum (as Felix’s wife), Siem Vroom (as a police inspector), and Hans Veerman (as the boss at “Rising Sun”, the electronics company working in tandem with Felix’s employers).

The script does possess some passing interest for the way that it touches upon the subject of technological evolution (with computers that used to fill up entire rooms now becoming much more compact, and the advent of computer chips).

“The Lift” is a little light on gore and other exploitable elements, but overall it’s fairly entertaining to watch. Maas does pretty well working with the limited budget, and IS expert at crafting suspense, especially the eerie and atmospheric finale with Felix in an elevator shaft. The electronic score (composed by Maas) is likewise a highlight.