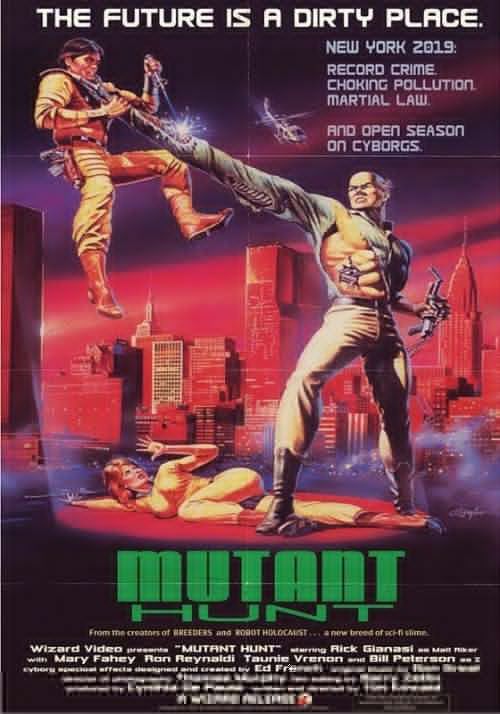 It’s cheap and cheesy genre time with the no-talent independent filmmaker, who stumbles his way through this supposed “Blade Runner” riff. In the “future”, mutant cyborgs are being injected with a special drug by evil, world domination minded scientist Z (Bill Peterson). The only man who can even try to put an end to Z’s diabolical plan is mercenary / mutant hunter for hire Matt Riker (Rick Gianasi). Of course, Matt will get by with a little help from his friends, Johnny Felix (Ron Reynaldi) and Elaine Eliot (Taunie Vrenon).

The special effects and makeup are, surprisingly, not that bad, all things considered. Ed French created a puppet cyborg head that is pretty cool – and which does give the best performance in the movie! Everyone else is varying degrees of dull. Thankfully, the attractive female cast makes things worth enduring, especially Ms. Vrenon, who has an alternate job as an exotic dancer. The insistent pop music score helps to move things along adequately, no matter if the bulk of this production is inept from beginning to end. The fight scenes are somewhat less than exciting, and not exactly directed with much zeal. Kincaids’ script is talky and inane.

Of course, who chooses to watch something titled “Mutant Hunt” and expects anything different? Truth be told, this viewer would still rather watch stuff like this than a lot of the mega budget crud churned out by Hollywood. At only 74 minutes long, this harmless bit of nonsense goes on no longer than it should.