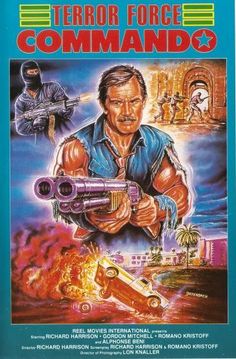 THREE MEN ON FIRE is your average cop vs. terrorists thriller with the requisite amount of globe-trotting, fistfights, car chases, and even some ridiculously bloody squibs at times. Overall the film is remarkably high on entertainment value despite being low on originality and even lower on budget. Overall the performances are quite solid featuring career-highpoint work from Romano Kristoff and unsung background actor Lorenzo Piani (getting to have all the fun as the villains). African star Alfonso Beni puts in an honest performance and gets to do a lot of running, though his voice was dubbed because apparently he spoke no English at the time.

This film was more or less a labor of love from long-time actor Richard Harrison, who had also made a living secretly ghost-producing and directing a number of projects over the years. This is one of the rare few he actually took full credit for and it’s easy to see why. There’s a number of impressive shootouts and location set-pieces, even some genuine suspense during a scene where the terrorist leader sneaks into a hospital to kill someone. Amazingly there was practically no money for any of this and almost all the location shots (and there are many) were guerrilla’d. This means the coverage is pretty minimal but it’s impressive what they were able to come up with none-the-less. Fits in comfortably with the action thrillers of the early 70’s, betraying the fact that it was actually made in 1986! Harrison’s sons all have cameos throughout the film, as do the family members of star/co-producer Beni… maybe per some sort of trade deal to get all the sweet location filming in Cameroon? Since Harrison lived there, most of the action takes place in Italy. Look for crime regular Riccardo Petrazzi in a SCARFACE-inspired torture scene, as well as Gordon Mitchell as a businessman targeted by the terrorists. A couple other familiar faces pop by here and there such as Russell Case and Donald Hodson as a weapons dealer.