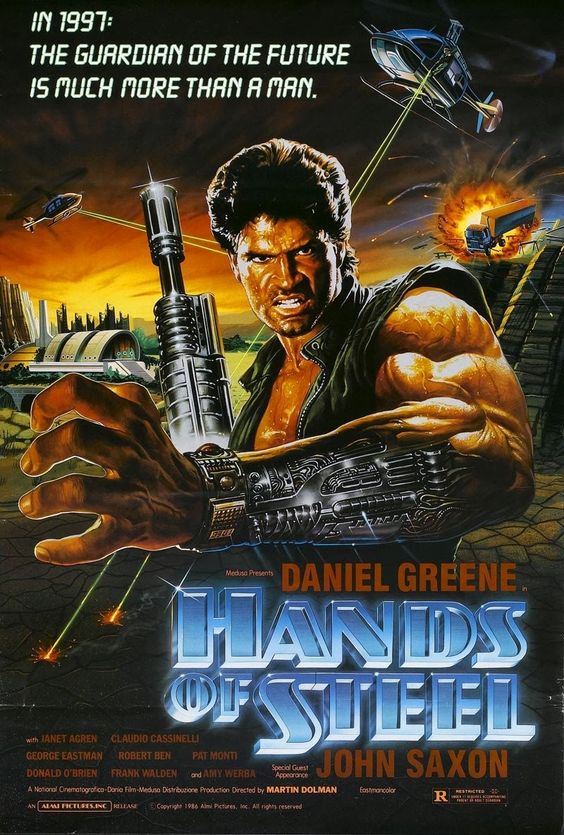 Not only is this Italian flick a ripoff of THE TERMINATOR, but it predated the arm wrestling cinema classic OVER THE TOP. In an undisclosed future, cyborg Paco (David Steele) is sent to assassinate a blind environmentalist (whose slogan is “You have no future!”). But he doesn’t finish the job when a bit of his human heart takes over. Paco heads to the Nevada desert to hide out and, while at a cheapo motel, becomes the region’s champion arm wrestler. Because we all know arm wrestling is the sport of the future. I laughed out loud when they showed their wall of arm wrestling champs that included wrestlers Bruno Sammartino, Hillbilly Jim, Magnum TA and Dory Funk, Jr. Lead Greene looked so familiar but I couldn’t place him. Checking here at the IMDb, he played the Dad in KINGPIN and the meathead in ELVIRA, MISTRESS OF THE DARK. So there is life after Sergio Martino movies. Janet Agren, John Saxon, George Eastman and Donald O’Brien show up for support and are all fine. Sadly, I also read here that Italian character actor Claudio Cassinelli, who plays Saxon’s hired hit-man, was killed in a helicopter crash while filming that. I guess that is why Saxon’s men off him quickly at the end and you just see him lying face down.