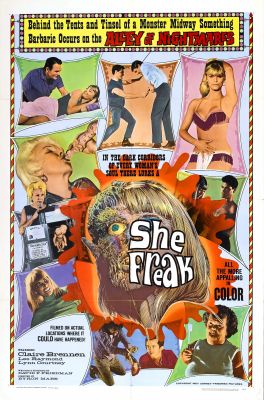 SHE FREAK is, near as I can tell, the 1960’s remake of the classic freak film FREAKS, directed by Tod Browning. Unlike Browning’s movie, however, SHE FREAK contains almost no freaks at all. The biggest problem with this movie is that a grand majority of it contains stock footage of carnivals being set up and taken down, shots of random people on rides, and other such mundane images of fair grounds and carnies.

What little story there is revolves around Jade Cochran (the late Claire Brennan), an average-to-homely woman who begins the movie as a coffee shop waitress with high aspirations. After getting fired from her job for not being appreciative enough (if you know what I mean), she finds work at the local carnival, becoming good friends with one of the strippers. She eventually meets and seduces Steve St. John (Bill McKinney) and marries him, although it’s made very plain that she’s a bit on the easy side, as prior to the marriage she has a little bedroom bam-bam with Blackie Fleming (Lee Raymond), a man egotistical enough to decorate the walls of trailer with his own name in spray paint.

Steve St. John, Jade’s new husband, is in charge of the freak show, something that deeply disturbs Jade. See, Jade is a bit on the shallow side, thinking more about the material advantages of marrying a man with money and less about the human side of his work trying to make a life for people who might not otherwise have one. Since Steve isn’t the most attentive of husbands, Jade’s little fling with Blackie continues despite the marriage. Then, one night, the only freak in the movie–a little person named, appropriately, “Shorty”–sees Jade getting it on with Blackie, and while he says nothing, he makes his dislike of Jade as clear as this script is capable of making it.

Things escalate (so to speak) from here, with Jade becoming increasingly open about her dislike of the unseen freaks. Unfortunately, as an actor, Claire Brennan was as talented as she was attractive, and when she expresses her disgust she does so with a smile that she holds back with painful difficulty. Soon, Steve St. John catches Blackie after one of Jade’s indiscretions, the two of them have a fight, and Blackie stabs Steve to death in a very brief and tame fight scene. Jade then inherits the freak show, and runs it with a cold heart, in contrast to Steve, who considered the freaks close friends of his.