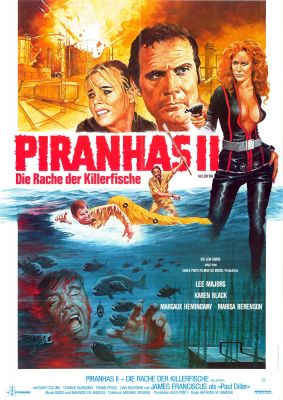 Killer Fish is yet another Jaws inspired horror flick from the late 70’s. Set in South America, it’s about thieves who steal a box of diamonds and then throw it into a lake in order to hide them. The plan is to retrieve the booty once the heat dies down but unfortunately it turns out the lake is infested with piranhas making retrieval of the stolen goods a little tricky. Distrust and betrayal quickly set in amongst the thieves.

This flick was directed by Antonio Margheriti who was a prolific but fairly middling Italian director responsible for the likes of Naked You Die (1968). This flick was obviously one of the many water-based horror flicks from the time but for the first two thirds of the movie it’s more-or-less a crime film. The piranhas of the title take a while to get involved and it’s only towards the end that we actually see them. But once a dam breaks and the killer fish are set loose around the surrounding area, the movie moves more squarely into horror territory. The cast isn’t too bad all things considered. We have the cheesy Lee Majors in the ostensibly good guy role. The interesting Karen Black is one of the thieves torn between Majors and the brains behind the gang, James Franciscus. Black and Franciscus are better actors than Majors and have more interesting parts.

It maybe could be argued that Killer Fish tries to do too much by being a hybrid crime/horror film. And maybe its focus can get a bit lost but it is a decent time-filler and is fairly well made and acted. It’s pretty low-budgeted but there is some decent model work and effects in the opening power-plant assault mission as well as the dam bursting sequence. Of additional note, there is a rather hilarious scene where a fat photographer gets eaten by the piranhas – for some reason the group thinks it would be best to send out the only clinically obese member of the team on a pathetically flimsy raft first as a try out. Needless to say that idea ends in tears.