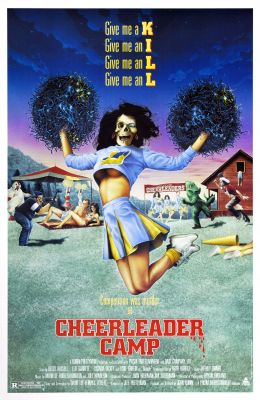 All of the best and brightest cheerleaders in the country attend a special camp where they can extend their talents. The only problem is that some sort of madman has also shown up and soon the cheerleaders are dropping dead.

CHEERLEADER CAMP obviously wasn’t meant to be taken too serious and it’s clear that it was making fun of the slasher genre. This here is basically PORKY’S with an added slice of murder and for the most part the film is entertaining enough to make it worth watching.

What makes the film so entertaining is the cast who manage to be fun and keep you interested in everything that’s going on. Of course, all of them are way too old for their parts but this is just something most viewers will be accustom to. The cast really manages to be fun and that’s the most important thing.