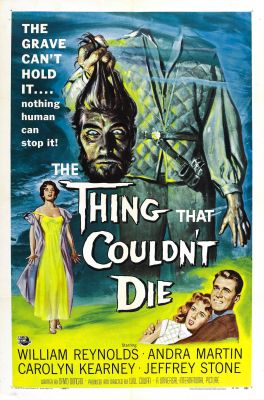 Written by David Duncan and directed by Will Cowan, this horror tale is also known as THE WATER WITCH. A bit scary with situational terror, THE THING THAT COULDN’T DIE, or wouldn’t die. Using a dowsing rod on her aunt’s ranch, a young female psychic makes a startling discovery. A box is recovered from the ground and it contains a 400 year old head! This is the living head of a 16th century devil worshiper named Gideon Drew(Robin Hughes). The dismembered head’s whispers will hypnotize anyone listening to search for its separated body. The dowsing rod figures to be important in the search, no matter who uses it.