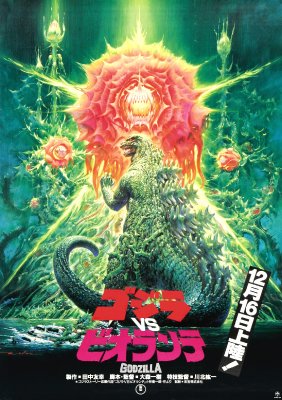 Gojira vs. Biorante (or Godzilla vs. Biollante as it’s know here in the USA) opens up right where Godzilla 1985 left off. A group of scientists searching through the rubble that was once Tokyo make an interesting discovery: Godzilla Cells. These “Godzilla Cells” are actually palm-sized flakes of Godzilla’s skin that were either scratched or blown off. Now many different groups of people are fighting to get these cells and one group in particular called Bio Major, which is an American terrorist organization, will stop at nothing to get these cells, even if they have to release Godzilla from his volcanic prison. On a lighter note, a prominent Japanese scientist who lost his only daughter in a terrorist bombing, combines the Godzilla Cells with the cells of a rose plant. Once these cells are joined together, they form a monstrous rose that the scientist names Biollante. Now Godzilla gets loose and pretty soon you can guess that Godzilla and Biollante are going to go at it.

This is in fact my favorite Godzilla movie in the second generation of Godzilla films. It has a real dark tone and a really haunting score. It should also be pointed out that the film is probably the most violent in the second generation of Godzilla films. I say this because there are several bloody shoot-outs, Godzilla gets stabbed in his side by one Biollante’s tendrils, a man is strangled to death, and a man is disintegrated by electricity.

Finally, has anyone noticed that the Godzilla costume in this movie is different than the one in Godzilla 1985? I think that is because the costume in G-1985 was stolen and was rumored to be worth over $100,000.