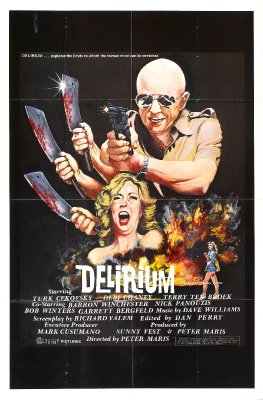 PSYCHO PUPPET is certainly trying to be something though just what that is remains unclear. Today the film is best known for something other than any of its attributes — It was infamously included on the list of “Video Nasty” films banned in the UK in the early 1980s. Looking at it now one wonders what all the fuss was about, or if the people who issued the verdict against it even watched the damn movie.

The premise is not without interest: Vietnam vets pre-programmed to kill are recruited as part of a Star Chamber like urban vigilante squad passing judgment on the criminals slipping through the cracks of the criminal justice system. The murdered criminals are passed off as suicides with nobody any the wiser, until one of the vets flips out and goes on a general killing spree.

Its here that the Brits found their problem as the Psycho Puppet of question takes off after exclusively buxom blond bombshells who obediently strip right down for the camera. The film is sleazy, voyeuristic, tacky, cheaply made, with dialog that makes a Sears catalog sound smooth. The sexualized nature of the killing scenes is completely out of proportion to anything else in the film, and exist only to provide a lurid thrill. There is nothing to be learned from the story and no profound thought is advanced by its telling.

And yet there is something compelling about this inept, nasty little movie. Mostly offbeat locations & some bizarre casting choices, showing us an underside of St. Louis that is highly unflattering. The film exists in an uneasy juxtaposition between a tacky disco culture and a run down dilapidated post-industrial urban ruin that has no aspiration to glamor or sophistication. Its late 1970s polyesterized look makes the film look unhealthy, like it needs to get some sunlight & start eating more fresh vegetables. It looks scuzzy.

Standout role is the weird bald guy, a twisted Vietnam vet with a mad hatter’s view of American justice. He’s a great villain while the film allows him to be one but sadly everything falls apart in the last fifteen minutes leading to a protracted gunfight that undoes any originality that came before it. The film I kept thinking about while watching it was the first Dirty Harry sequel MAGNUM FORCE, which also featured a post-industrial urban wasteland in its climax with nihilistic violence mixed with lurid exploitation.

The main difference being that PSYCHO PUPPET wasn’t made with any artfulness or sense of craft and exists only as a bleak reminder of how stupid people can be when they get into positions of power. Whoever banned this movie from Britain obviously never saw it since there’s very little to get worked up about in it. Those seeking it out for a joyride of vicarious thrills will be disappointed and anyone looking for a message will come up empty. It’s a curious, cold, cruel little movie, existing as a footnote. Which may sound pretty dismal, but its a pretty dismal movie and at least it’ll remembered for something.