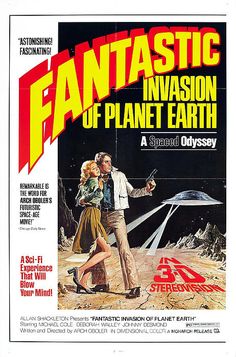 Director Arch Oboler (“The Twonky”) pioneered a new 3-D process called “Spacevision” which used polarized glasses to separate the right-and-left images for the audience. The 3-D effect works remarkable well, especially in a scene involving a serving tray which floats out of the screen and (apparently) right up to the viewer’s face.

Oboler obviously made “The Bubble” just to show off “Spacevision”; the plot is practically nonexistent, and the film is littered with scenes that poke objects out of the screen at the audience. In Deborah Walley’s first scene, she holds her arms out to the audience and exclaims “Darling!” to husband Michael Cole.

The token plot is about a small town which alien invaders have isolated inside a spherical force field (the bubble of the title). A small plane piloted by Johnny Desmond and carrying newlyweds Michael and Deborah is forced to land during a storm, and the trio end up trapped in the town. The town’s citizens act like broken robots, repeating routine tasks over and over, oblivious to everything around them. Olan Soule has a small role as one of the automaton Earthlings. The alleged alien invaders are never shown.

Music by Paul Sawtell and Bert Schefter (the team which provided mucic for “It! The Terror from Beyond Space” and many other 1950s classics). Arch Oboler served as producer, screenwriter, and director — so he has nobody to blame but himself.