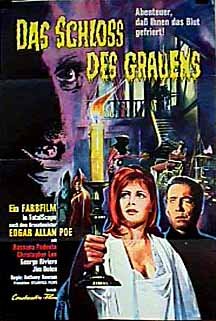 This is a popular title in the Gothic tradition of Italian Horror cinema – from one of its most prolific exponents but, in hindsight, not really among the best examples – that I had been rather longing to see. In fact, I acquired it first in an English-dubbed version (also available on R1 DVD) and, subsequently, with its original Italian soundtrack (which is how I watched it now – although I do not recall it ever having played on Italian TV)! Curiously enough, while the film was released in the U.S. as HORROR CASTLE, the DVD sports the literal English translation of the Italian title (which refers to a particularly nasty medieval torture device).

Incidentally, despite the modern-day setting, events unfold completely in a vast ancient German castle! Similarly, the presence of genre icon Christopher Lee (billed Cristopher in the original Italian credits!) as a mysterious and sinister-looking manservant – bearing WWII-induced facial scars – proves misleading, since he is not actually the villain of the piece (although his character still perishes in the obligatory fiery climax)! The killer on the loose (who can also be considered a monster, given his hideous pre-DR. PHIBES look – ludicrously, as a result of the real-life failed “Valkyrie” attempt on Hitler’s life, and possibly inspired by the seminal EYES WITHOUT A FACE [1959]!) is a Crimson Executioner-type torturer, albeit anticipating that very film by two years.

The heroine is played by Rossana Podesta’ (soon to be divorced from the film’s producer Marco Vicario), who spends much of the time prowling the castle grounds and conveniently discovering victims’ bodies. Her husband (Georges Riviere) not only shuns her assertions to the ghastly goings-on but absents himself for periods on end which clearly points the finger of suspicion towards him; this notion, however, is dissipated when he finds himself trapped in a flooded underground cave straight out of Fritz Lang’s THE TESTAMENT OF DR. MABUSE (1933)! As it turns out, the real identity of the bloodthirsty maniac is not all that hard to guess – despite the film boasting the writing talents of Ernesto (1962’s THE HORRIBLE DR. HICHCOCK) Gastaldi and Edmond T. (the 1960 version of THE HANDS OF ORLAC) Greville! Interestingly, the film is accompanied by an incongruously jazzy score by Riz Ortolani which works rather well; its main asset, however, is the enveloping brooding atmosphere vividly rendered through stylish color photography.

While Margheriti started out in low-brow sci-fi, he seemed to really find his métier within the Gothic Horror stakes, following this first effort with such effective examples as two Barbara Steele vehicles shot in monochrome – CASTLE OF BLOOD (though its color remake WEB OF THE SPIDER, dating from 1970, was a disappointment) and THE LONG HAIR OF DEATH (both 1964), THE UNNATURALS (1969) and SEVEN DEATHS IN THE CAT’S EYE (1973).