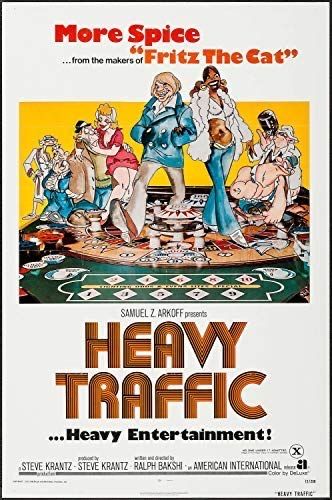 This is rumored to be animation-pioneer Ralph Bakshi’s favorite among all his projects. And no wonder. This is his story! A 22-year old Jewish-Itallian spends his time playing pin-ball non-stop and drawing. He still lives with his parents, an Itallian man who cheats on his wife and a Jewish woman who’s so emotionally torqued up–such a drama queen, that when Angelo comes home after a night with his lady, she hits him over the head with a frying pan and sticks his head in the oven.

There’s always domestic unrest in any family, particularly with interracial married couples who lived in the Bronx around this time. But they’re so wound-up, so ready to snap–they come to blows and sharp instruments a little too quickly.

Way too quickly, in fact. Angelo and Ida’s Punch-and-Judy relationship–coupled with the problems that reside outdoors in the Bronx–Michael seems doomed to have some of it rub off on him. “You hang around garbage long enough, you start to stink,” as they say.

But Michael has an outlet for his angst and confusion. Rather than fall into the trap many around him seem to, he vents himself at the drawing board. He draws a lot of the people and places in the Bronx. Although he seems to dislike many of them, they’re so broad and colorful and wired, they translate easily to caricatures.

Bakshi takes us to all the usual haunts we visit in his movies–trashy ghetto neighborhoods with buildings that look condemned, dirt-cheap apartments, behind the wheel of cars, rooftops, nightclubs, bars, brothels.

The lives of all of the Bronx inhabitants: Jews, Itallians, blacks, drag queens, junkies, vagrants, hookers, cops, thugs and the like. And by using animation, Bakshi (and Michael) sort of illustrate their world and their eccentricity, which is so dangerous, it borderlines on insanity.

I wasn’t particularly crazy about the disco remix of “Scarlbrough Fair.” What can I say? I fell in love with the original.

But I suppose it does fit in with the nature of the film. Bakshi uses a lot of shots of Michael playing pinball. He’s a big pinball fanatic. It’s obviously a metaphor, perhaps for the hectic universe in which Michael bounces from one scenario to another, for which he’s constantly out of place.

Carol is a black woman who works at a local bar where Michael draws on the roof. She’s loud, she’s opinionated, she’s passionate. And she really seems to be about something. She’s not just an ethnic joke.

Like all bars, there are lots of colorful locals there, plenty of dangerous ones to be sure.

Michael tries to score free drinks with his art. But that’s all he tries to score Michael’s no ladies’ man and he knows it. He’s a deep, sensitive, skilled artiste. And a sitting duck for some of the louder, tougher guys who make up the city.

It doesn’t help matter that he’s a virgin and everyone knows it. At one point, some greasers try to hook him up with a loose woman who’s eager to have it with a guy who’s so fresh and green. Although this leads to a disaster. Even his own father tries to hook him up. Now there’s a true loving father for you.

Michael has an eye for Carol (many people at the bar she tends do), not because he’s dying to get laid like nearly every other male. But he seems to genuinely feel something real for her. When she offers it up to him in gratitude for a favor, he faints. He wants her, but he’s just not ready.

Ida is fussy and over-protective of her son, just like a mother hen. Or rather a Jewish mother. Angelo wants his son to be more of a “man’s man.” Like all of Bakshi’s films, this contains a lot of graphic violence and sexual images, as well as caricatures in the ethnic vein.

But surprisingly, in the strangest way, it contains real heart, as well as some sweetness. The relationship between Michael and Carol has to be seen. Bakshi could’ve made her just an archetype like everyone else and he didn’t. She’s just as developed and human and relative as dear Michael is. These two deserve one another.

“Heavy Traffic” is wildly imaginative and thrilling in all it’s glory. Like “Being John Malkovich,” we actually feel like we’re inside the author’s head rather than his film. This truly ranks as Bakshi’s best. He deserves more credit for this than “Fritz The Cat.” How much of all this take place in Michael’s mind and how much of it takes place in his reality? Maybe they’re one and the same. Maybe not. Maybe we’re supposed to figure it out. It up to us. Just like Michael’s life is up to him.

The characters in the city are so damn cartoonish and erratic already, they transfer them into cartoon characters without losing anything in the translation.

Bakshi doesn’t paint a pretty picture of the city and it’s locals. But then again, he never has, has he? That’s one of the things he’s known for.