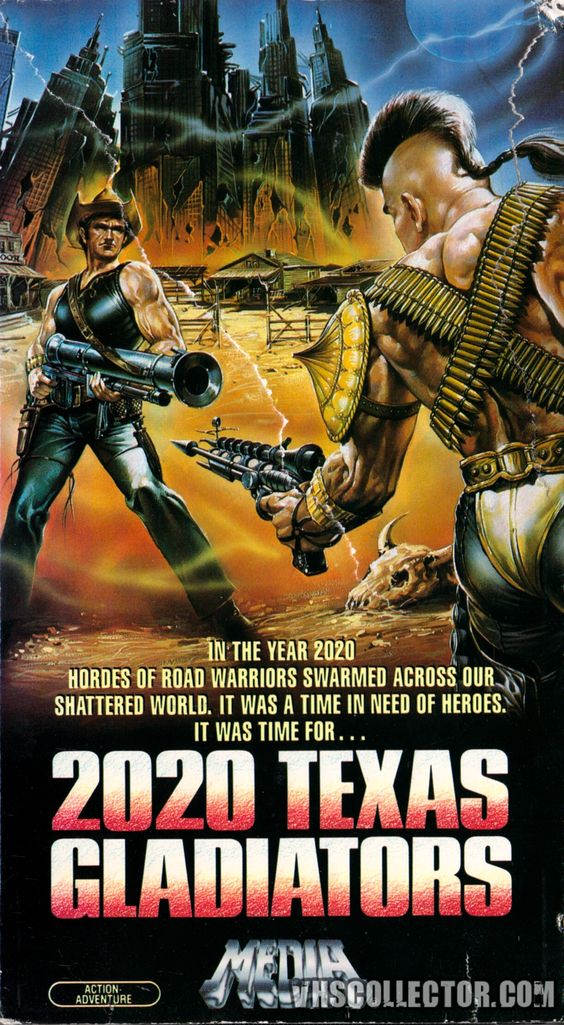 The place is Texas.

The setting is the aftermath of the great nuclear war that devastated everything. In this new environment, man has deteriorated to the level of beast.

The opening scene is the carnage at a “church” (which looks like a deserted warehouse with a cross, a statue, a priest dressed in all red and two nuns). Apparently these savage men (they look prehistoric) are attacking. The priest is being assaulted and nailed to a cross, while the nuns are being raped and ravaged. In the midst of this (after enough watching) our 5 Texas Gladiators appear and kill everyone who isn’t a priest or nun. One of the Gladiators, Catch Dog, rapes(I’m not sure if he’s successful. It looks like no to me, but the others are sure he has.) a young girl (Maida – Sabrina Siani) he’s found. The other Gladiators take offense to this and dishonorably discharge him into the desert. Apparently they have a strict moral code and go around the wastelands enforcing their own brand of justice.

We are then thrust into the future, where one of the remaining four (Nisus – Al Cliver) has joined Maida at this research facility where they are developing their own power supply. Apparently they have a daughter as well. Not sure when this happened. Time sure flies in the future. No wonder that gold watch is so coveted. Catch Dog then shows up with a whole bunch of guys on motorcycle and they attack the compound. Think of the Road Warrior, except change from gas to nuclear, and make everything really crappy looking. This is then followed up by Catch Dog’s ally showing up in an old, beat up truck all painted black. Of course I mean Donald O’Brien and his brown jumpsuit paratroopers (they all wear black motorcycle helmets and have these giant shields with holes in them). These guys have “modern” weapons and decimate the entire facility. After, Maida gets raped yet again, Nisus is killed and we are transported, without warning, into the future again.

The director, having stolen every cliché from every post-modern-cataclysm movie, begins to steal from other genres (a.k.a. – The Deer Hunter). We are now in a bar, playing Russian roulette. This is not a Christopher Walken moment. It is actually pretty dull and laughable by comparison. Anyway, it turns out Maida is now the property of this gambler. The remaining 3 Gladiators turn their attention to him, when they discover he has one of their “amulets” (its just a circular pendant with a 5 on it…. it could be a nickle with a hole in it for all we care). They win and get the girl, but two are sent off to a hard labor mine for causing so much trouble. The third rescues them and somehow Maida becomes the fourth honorary member of the group. She seeks revenge and the plan becomes to take down Catch Dog and the Black One (a.k.a – Donald’s O’Brien’s impersonation of a bald, crazy SS officer).

This movie is ridiculous on so many levels. Continuity, plot, transition, sets, props, costumes are all meaningless. This is an Italian rip off of something. This is like 2019 : After the Fall of New York, except that was actually not bad. Maybe this was the sequel to that ??

Anyway, this movie is horrible. Its so bad, one can’t stop laughing. The sets consist of filming in rock quarries, mines, abandoned factories/warehouses and the woods. The props all look like something that was left behind in Italy after the Nazi’s were defeated. Did anyone notice the Gradius video game in the bar ? All the actors and stunt people got their 2 day course diploma from the William Shatner School of Acting and Fighting. We also get a lot of travel time (think Manos : The Hands of Fate). We get to see a lot of going somewhere, either by walking, running or driving. What is nice is Sabrina Siani. She was very hot. She gets plenty of screen time (this includes her numerous rape scenes) and a lot of running is involved. If one was careful enough and seen many of these Italian knock-offs, one might notice the familiar breasts. Yes, thats right. She’s the body of Ocran, from Lucio Fulci’s Conquest.

The movie is not quite as smooth as 2019, but it has it’s own moments. It is quite silly (especially at the end when it turns into a western) and definitely worth watching if you’ve got time and laughs to spare, or if you’re looking for something to cheer you up. To sum it up in one idea : the director, Joe’ D’Amato, is responsible for giving us Ator the Invincible (Miles O’Brien !!! NO! NO! NOOOOOO !!!!).