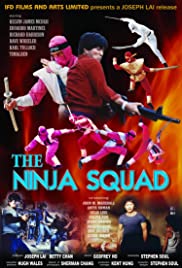 Having actually enjoyed a couple of Godfrey Ho’s ninja movies, I had toyed with the idea of tracking down and reviewing them all, but after the travesty that is The Ninja Squad, I think I’ll knock that one on the head: just the mere thought that this might not be the cruddiest of Ho’s films sends a shiver right down my spine.

For The Ninja Squad, Ho once again takes an old Asian flick and splices in some totally unconnected ninja nonsense (starring Richard Harrison, naturally) to make a completely new product; as always, the result is a disjointed mess, but whereas some of his other efforts manage to entertain by either being unintentionally hilarious, downright sleazy, or both, this one is, for the most part, extremely boring.

The non-Richard Harrison material sees trained ninja Billy avenging his mother’s death, not through the use of his martial arts skills, but by gunning down her killers with an assault rifle. It’s non-stop action all the way, but so poorly thrown together that it quickly becomes very tiresome. These parts of the film also feature some of the worst dubbing I have ever heard—funny at first, perhaps, but it soon becomes irritating.

Meanwhile, the newer footage features Harrison as Pink Ninja (ooh ducky!), who spends his day swinging his weapon around waiting for villainous rival Ivan the Red to finish killing other assorted colour-coded ninjas (white, yellow, black and that old favourite, camouflage ninja) so the two of them can clash swords at Falcon Ridge (didn’t Joan Collins used to be in that?). Moderately amusing in places (Ivan’s golden boomerang and frisbee made me laugh), but not enough to make me ever want to go anywhere near this film again.