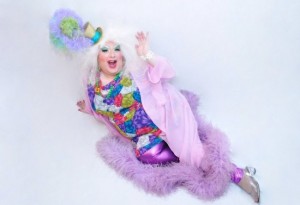 When Scared Stiff premiered last week night at The Bar, a small crowd of bizarro movie buffs gathered to see cult classic Plan 9 From Outer Space. But it wasn’t just the campy Ed Wood-directed flick that brought folks in — it was drag queen Alexus Vain’s commentary, which runs parallel to each weekly showing of a beloved/awful sci-fi or horror film of the past.

Tomorrow night, Vain invites you to enjoy free popcorn and a free presentation of Colossus and the Amazon Queen, as the queen of sass herself gives the 1960 not-so classic film a good, and very free, verbal whipping.

“If you can imagine Divine meeting Elvira in the same body, and then putting her in front of a movie screen, that’s Alexus,” says Ray Rodriguez, owner of the Bar. He goes on to explain that, from her position on a fainting couch at the foot of the projection screen, Vain drops one-liners and jabs at films, very much in the style of Mystery Science Theater 3000. While he’s heard of the movie/live commentary combination happening in other cities, he adds, Scared Stiff is a the only weekly event of its kind in Denver. And even better, it’s free.
When Vain first brought the idea of Scared Stiff to the Bar owners a few months ago, it was half-joking. But the concept found a sympathetic audience: “I’ve always been a fan of Elvira,” Vain says of the character created by Colorado Springs native Cassandra Peterson. The bad films premise was such a hit, in fact, that now Vain hopes to eventually bring another notoriously terrible Ed Wood piece, Glen or Glenda, to the night for a taste of good-natured chiding. For now, though, to keep the shows free, Vain and the Bar are sticking to films that are public domain.

Catch Alexus Vain’s Scared Stiff series at 9 p.m. every Tuesday this summer at the Bar. Vain offers up some pre-film introductory commentary, but the movie begins not too long into the hour — and the commentary definitely continues.