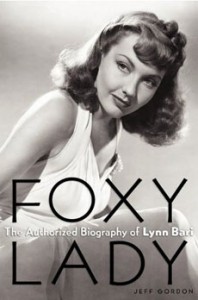 Who is the Roanoke-born movie star who once lived at 621 Walnut Ave. S.E.? This was the question I posed in “What’s on Your Mind?” a couple of weeks ago, after reader Joel Richert first posed it to me (I didn’t have a clue). This week I have the answer: The movie star was Lynn Bari.

Never heard of Lynn Bari? A gorgeous B movie star and pinup girl, she appeared in scores of films between 1933 and 1968 – Wikipedia lists more than 120. She was sometimes known as the “Girl with the Million Dollar Figure” and the “Woo Woo Girl,” according to various sources. The Los Angeles Times once described her as a “husky-voiced siren,” “statuesque” and “darkly beautiful.” She has a star on the Hollywood Walk of Fame. She died of a heart attack in 1989.

The two-story, Mediterranean-style house at the foot of Mill Mountain was her childhood home.

So how did I figure this out? With a little luck and a lot of help, from both readers and ace Roanoke librarian Laura Wickstead at the Virginia Room. Richert’s initial suggestion that the mystery actress might have been named Margaret Morrison was, in fact, a red herring. Turns out local real estate agent Joe Kraft, of Park Place Realtors, who plans to list the Walnut Avenue property for sale later this month, had pulled the name from an old property deed card, after hearing that a female movie star once lived there. It had not occurred to Kraft that the movie star in question might have lived in the house as a little girl, under a different name.

It was reader Daniel Jones who gave me the clue. He, like me, had never heard of a movie star named Margaret Morrison. But he did mention several other well-known actors and actresses who have been associated with Roanoke. One of them was Bari.

I had a hunch about her, and a little digging and Wickstead quickly confirmed it: Little Lynn and her family lived in the Walnut Avenue house in the early 1920s. Bari’s name was Marjorie Fisher then – in a later interview, she said she chose her screen name by combining the names of actress Lynn Fontanne and author James M. Barrie. Wickstead found the Fisher family listed at the Walnut Avenue address in Roanoke city directories for every year between 1920 and 1925. There is no mention of them afterward.

Several sources note that the family relocated to Boston in the late 1920s, and then to Los Angeles, where 15-year-old Marjorie/Lynn acted in her first film, “Dancing Lady,” with Joan Crawford. (Some sources indicate her next film, “Meet the Baron,” was actually released first.)

Google “Lynn Bari and LA Times” for Bari’s Star Walk bio and 1989 obituary. The website Glamourgirlsofthesilverscreen.com includes an extensive timeline of her life, beginning with Roanoke. A biography, “Foxy Lady,” by Jeff Gordon, detailing her struggles with a domineering mother and unfortunate marriages, was published in 2010.