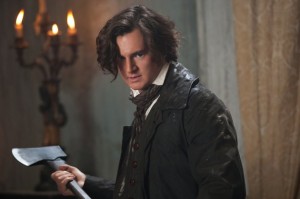 History tells us that Abraham Lincoln is the 16th President of the United States, best remembered for the Gettysburg Address and the Emancipation Proclamation, and reputed to be one of the 3 greatest U.S. heads of state.

Per American author Seth Grahame-Smith’s Abraham Lincoln: Vampire Hunter, however, Lincoln also led a secret life, as the novel’s title succinctly suggests. And that book’s “alterna-history” account of Honest Abe as part-politician and part-vampire slayer comes to vivid life with the movie adaptation to be released worldwide by 20th Century Fox this July (July 4 in the Philippines).

Abraham Lincoln: Vampire Hunter is not just highly anticipated by the 2010 novel’s huge readership; it is likewise a hot celluloid commodity as it is the latest from Kazakhstan-born filmmaker Timur Bekmambetov, whose flair for cinematic mayhem had been on glorious display in his earlier adaptations of other published work: Russia’s Night Watch and Day Watch, and his Hollywood debut, Wanted.

Bekmambetov, Grahame-Smith, Walker and Sewell recently sat together for a brief live chat via Livestream, fielding a selection of questions from RAPPLER and other media outlets in line with their work on Abraham Lincoln: Vampire Hunter. Amid their lively discussion, one can discern the team’s enjoyment at having made the movie and their own anticipation at the world’s reaction to it.

OF, FOR AND BY the people. Benjamin Walker speaks as the Americans’ beloved president.

What drove Grahame-Smith to come up with his Vampire Hunter book in the first place?

“I was on tour for Pride and Prejudice and Zombies (his first ‘mash-up’ novel) and everywhere I went, there would a book about Abraham Lincoln and the Twilight books on display. At first I thought it was some (cosmic) joke until I realized that it might be good to put Lincoln and vampire lore together.”

The author says that Lincoln is far more embedded in the American psyche than, say, George Washington or Benjamin Franklin, and that the President’s era, “a time when the country was tearing itself apart,” was a thematic fit for his revisionist novel. That, and “I think Abraham Lincoln is the first true American superhero.” Walker concurs, noting that Lincoln “was a common man who pulled himself up to become a hero.”

Walker, who “had to lose weight, spend months on axe-throwing, wushu and hitting stunt guys with a rubber axe,” relates that “We did a lot of research for this.” He specifically cites his reading of the book Lincoln’s Melancholy, a fascinating study by Joshua Wolf Shenk of how Lincoln dealt with lifelong depression. And as he himself did with his novel, Grahame-Smith attests that “everything within this movie is treated with care and historical accuracy.”

For his part, Bekmambetov remembers reading a Russian thriller author’s account of the US Civil War, adding with a proverbial wink that that book holds “secrets that American doesn’t want to talk about.” He also cites that “America is a country of immigrants and (the novel’s) vampires are immigrants.”

From page to screen

When asked how much of its source material wound up in the movie, Bekmambetov quips, “50/50.”

Grahame-Smith confirms that most of his book is in the movie.

“Being the author and the screenwriter has its advantages,” he says. “For me, it was a huge learning experience. It’s my book, so I had to be harsh and kill my ‘darlings’ and not let my ego get in the way. The climax of the film is more cinematic, too. But overall, the film is true to the spirit of the book.”

The novelist did “create a new darling,” as Walker puts it, with the addition of Adam, the lead vampire character portrayed by Sewell. The veteran actor himself was surprised to find that his character was not in the book. “I thought, ‘Well, that’s a good start,’” Sewell recalls. “He’s a counterpart to Lincoln. He sees himself as the ‘president’ of the vampires. He’s named Adam because he was the original vampire and was already around at the time of the ancients and the pyramids. He represents the heart of the threat that has to be dealt with.”

“Adam is elegant but vicious,” Grahame-Smith points out, “a gentleman like Rhett Butler, and Rufus makes him sympathetic.” Sewell — who is “frightening as Adam,” Walker asserts — says that “Adam is not vulgar (yet) he’s quite formidable.” The actor adds that, while his Adam is new to audiences, “What we know about vampires is in our blood. We grew up to Christopher Lee, Bram Stoker, and we gotta have a wink, a nod to the vampires of the past.”

On another note, Grahame-Smith observes that “It’s great that people who’ve read the book are not revealing its ending,” referring to an epilogue that the novel’s fans are keeping an eye on with the movie version.

Grahame-Smith credits producer Tim Burton for giving “us the protection” to make this movie on its creators’ terms and for giving a very important tip: “He said, ‘Never make a joke of the concept.’” (Walker jokes, “Tim wanted to take the movie back and direct it himself.”)

“Tim never told me, ‘I don’t like it.’ He was very supportive and his role in making this movie is huge,” states Bekmambetov, who also co-produced. Walker attests that “Tim was happy because Timur had great ideas” on how to pull the movie off.

Walker cites that Bekmambetov has an “extraordinary visual style,” which the soft-spoken director draws from a liking of kung fu movies and his worldly wise view that “action is an extension of the drama.”

The filmmaker notes that it was “challenging” to have shot Vampire Hunter in 3D. “(3D) is a unique visual language,” he says. “For example, in the fight scenes, the audience has to feel the distance between them and the ax.”

“I can’t wait to see all this in 3D,” Grahame-Smith says.

PRESIDENT BY DAY, VAMPIRE hunter by night. The movie comes to Philippine theaters on July 4.

As the chat wound down, the foursome indulged in a few lighthearted queries.

Grahame-Smith — who despite his very hectic life, tries “to write every day, to keep the pipes running so they won’t get rusty” — conceded that a zombie infestation would be easier to manage than a vampire one. “Zombies are stupid and they can’t figure out door knobs,” he says, but stresses that, “vampires are much more fun to write about.”

Walker, who as the movie’s three trailers show, underwent some prosthetic makeup for this breakout role and can swing and twirl axes with superb dexterity, cites that Lincoln’s trusty ax is “a great weapon, better than a gun. You don’t need to reload it.”

Perhaps the silliest question thrown the quartet’s way was this: If Buffy the vampire slayer, Van Helsing and Abraham Lincoln faced off, who’d win?