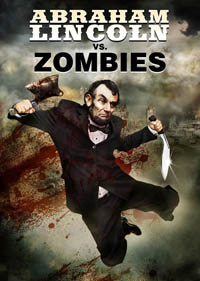 If there existed an Academy Award for Best Performance by an Actor in a B-Movie, this year’s winner would easily be Bill Oberst, Jr., for his outstanding portrayal of our 16th President in a motion picture entitled Abraham Lincoln vs. Zombies. It is certainly the closest thing to an award caliber performance you’ll probably ever see in a movie produced by The Asylum. You could never tell Bill Oberst, Jr., was even aware he was starring in a silly mockbuster of Abraham Lincoln: Vampire Hunter judging by the soulful sincerity he imbues his portrayal of Lincoln with. Oberst plays him with the same degree of gravitas he would if he were starring in a stage production of Abe Lincoln in Illinois, even during moments when he’s yelling “Emancipate this!” before decapitating a zombie with his trusty scythe.

If Ken Burns ever made an Asylum movie, it would probably greatly resemble Abraham Lincoln vs. Zombies. Staged, performed, and even shot in the same sepia tones as a PBS-produced historical reenactment program, one that just happens to include flesh-eating zombies, the biggest misstep this Asylum mockbuster makes is at times being too stuffy for its own good for a movie about one of our greatest Presidents slaughtering the undead with a sickle. A patently absurd premise presented with a level of earnestness that both undercuts the schlock value while also lending an unexpected level of classiness to the film.

President Lincoln is preparing to give his famous Gettysburg Address. By the time he gets around to doing so, we will have already heard him give numerous speeches, engage in a few needlessly drawn out conversations, and even deliver a soliloquy or two. I can’t help but feel kind of weird criticizing a b-movie about Abraham Lincoln killing zombies for being too literate, but being overwritten does prove problematic. You’ll probably find yourself like me wishing there was a little less talk and a lot more zombie killing.

The movie opens with a young Abraham Lincoln beheading his own zombie mother after finding his father dead, having committed suicide due to his inability to put Mrs. Lincoln out of her undead misery. This past encounter with the living dead is what makes President Lincoln uniquely qualified to lead a covert mission behind enemy lines (it appears they walked all the way to the Georgia) to deal with a zombie outbreak that has claimed the lives of a garrison of Union soldiers trying to take Fort Pulaski from the Confederacy.

Once there he has to contend with both the undead and also Confederates unwilling to help, including the legendary General Stonewall Jackson, played by an actor wearing a beard so fake you’d swear he was taking part in a “Saturday Night Live” skit. Lincoln also finds himself reunited with his past love, Mary Owens, now a woman of ill repute hiding out in a basement with her teenage daughter and some others trying to survive this zombie holocaust.

Lincoln will be aided by a Confederate by the name of Pat Garrett, aka the man who went on to become the Wild West lawman who killed Billy the Kid.

Less helpful is a Confederate sympathizing anti-Lincoln actor by the name of John Wilkinson; take a wild guess what name you better know him as. John Wilkes Booth, like so many actors, turns out to be a real prima donna even amid an assault by the undead.

Why a 10-year-old Teddy Roosevelt is hiding out in the basement of a brothel in Savannah, Georgia, in the midst of the Civil War is something I’ll simply chalk up to even greater creative license than the notion of Abe Lincoln battling zombies. I know Theodore Roosevelt was a man of adventure before becoming out 26th President, but I didn’t realize he started that young.

Many around him believe these people to merely be afflicted by some sort of illness that deserves to be treated medically, even after some of them have fallen victim to their flesh-eating hunger. President Lincoln repeatedly tries to convince everyone that what they are dealing with is an affliction that can only be resolved with guns, knives, and dynamite. Being a man of peace only extends to wanting an amicable end to the Civil War; when it comes to zombies, he much prefers to chop them to pieces.

These zombies are not your typical zombies seeing as how much of the time they just stand perfectly still until someone makes enough noise to rouse their attention. Certainly not that hard to kill, you have to figure they wouldn’t even be that big a menace if not for nobody at the time knowing what the hell a zombie is and having to fight them off with guns of the era that are fairly slow to reload.

We were about 20 minutes in when I told the friends I was watching the film with of my wild idea for how I would end the movie. Lo and behold, my idea was almost spot-on to how things wrapped up. Not because the ending was so predictable, more a case of me and writer-director Richard Schenkman both figuring out what the most creatively daffy way would be to resolve an Abraham Lincoln zombie killing movie so that it still ties into historical record. It’s a hell of an ending.

I give Bill Oberst, Jr.’s performance as honest Abe five stars. I give Stonewall Jackson’s fake ZZ Top beard another five stars. As for the movie, as enjoyable as it often is, I’m afraid the overwritten dialogue scenes, wildly uneven pacing, and sometimes confusingly staged action scenes prevent Abraham Lincoln vs. Zombies from fully living up to its full potential. I still have to give The Asylum mad props for even bringing this film into existence. Truly a mockbuster like none you have ever seen before.