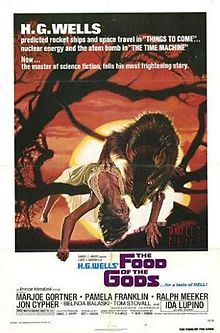 On an island, some crazy old lady and her husband found some white goo seeping out of the earth. So, they did what anyone would do–they mixed it with animal feed and gave it to their farm animals. The animals then grew to enormous proportions and soon had a craving for human flesh. Some particularly dim people get themselves stuck on the island and must fight giant animal models (being thrust at them by people from the props department) to survive. All the while, a REALLY dumb rich guy is imagining the riches he’ll make by harvesting this goo! I was not at all surprised to see Marjoe Gortner starring in a crap movie like this. What surprised me was seeing some once decent actors whoring themselves out in this film. To a small extent I was surprised to see Ralph Meeker but even more surprising was the famous 1930s-40 actress/director Ida Lupino. Was she bankrupt? Was she being blackmailed?! All I know is that the film is every bit as bad as the worst giant animal films of the 50s and 60s and 70s and these two never should have taken these parts.

Dumb acting, VERY dumb writing, horrible props and the like sink this production. One of the finer moments in the film was when giant bees attack as folks are INSIDE the cabin–so naturally one of them goes outside with a shovel to fight them! Later, when a Winnebago has a GIANT rat on the roof, the husband tells his wife (who is safely inside) to come outside to see the rat that is the size of a cow! Duh!!! By the way, this film would make a wonderful double-feature with “Night of the Lepus”–a 70s film about giant killer bunnies that is nearly the equal to “Food of the Gods” in the stupidity department.