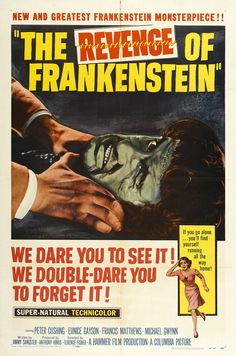 Revenge of Frankenstein is the only true sequel in the successful Hammer series. It is interesting to note, that principal photography began scant days after the completion of ‘Horror of Dracula,’ and it does not require a trained eye to see the re-dressed and painted Dracula sets throughout the film. Production Designer, Bernard Robinson, and Director, Terence Fisher both told me the paint on some of the flats had yet to dry when shooting began. Peter Cushing had the opportunity to refine and develop his portrayal as the driven Baron Frankenstein. His dialogue is caustic, witty and at times humorous. This again was the Golden Age of Hammer, that magic period that lasted but a short time. The team of Fisher, Robinson, Lighting Cameraman, Jack Asher, and a completely dedicated cast and crew shines as brightly as those newly painted sets. One of the best of the period, and still plays well today.