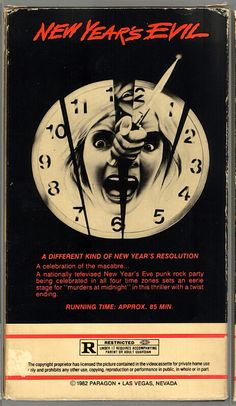 My, this has always been one of my faves of the genre. It is really quite ridiculous, but fairly ‘twisty’ for a run-of-the mill slasher. Kip Niven is in my opinion, very good as the killer who switches personas to fit in different environments in order to kill on his timetable. Grant Cramer, who was destined for nothing more than soap fame, has a handsome yet creepy face, especially after he forces that red hose over it. Roz Kelly does look truly unattractive – but then look at her audience! Those ‘LA punkers’ bobbing and weaving in the audience are unintentionally reminiscent of George Romero’s creations…check out their ‘dancing’!

Yet I have always found the best part of the film to occur in the beginning, the first time the killer calls into the radio show. He announces that his name is “Evil” in a very odd voice courtesy of a voice manipulation machine. He is dead serious, and Roz on the other end is slightly chilled, but tries to play along: “Yeah, you’re bad, you’re real bad.” At which point he cuts her off, still deadly serious: “NOOOO! Just EVIL!!!” It’s truly hilarious if you appreciate that sort of thing.

Enjoyable for the genre.