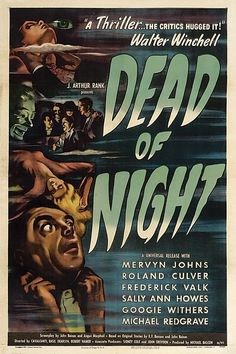 Dead of Night is responsible for so many films made in the horror genre, because it was the first that took a huge gamble and pieced several unconnected stories together within a narrative that loosely keeps them together. Tales From The Crypt, Vault of Horror, Tales That Witness Madness, The House That Dripped Blood, Torture Garden, The Monster Club, Creepshow, Tales From the Darkside: the Movie are just a few of the films that owe part of their existence to this little British film. The frame story details how a man goes to the country for a weekend only to say he has been there before and met the people there before in his recurring dream. He is thrust into a discussion between those that believe in his dream and one lone doctor(psychiatrist) who seems able to explain all phenomena in a scientific way. Each of the guests then in turn tells a story about their brush with the supernatural. Most of the stories are very inventive(although by modern standards cliched as they have been copied many times)and entertaining. Two of the stories really stand-out. The first is about a mirror that shows you a different room as you look into it, and the other about a ventriloquist with a split personality. The other stories are good, and one is humorous(perhaps out of place but fun nonetheless). Acting is solid throughout with Mervyn Johns as the man subjected to the same dream over and over again. Richard Valk excels as the doctor, and Michael Redgrave is outstanding as the man able to give the gift of speech to a “dummy.” Also of interest is the pairing of Basil Radford and Naughton Wayne form Hitchcock’s The Lady Vanishes. They DO compliment each other so very nicely. A wonderful, eerie film.