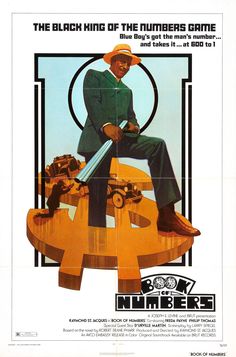 Philip Michael Thomas has probably only been seen by most audiences in the MIAMI VICE television series, the quintessential action TV show of the 80’s. But prior to MIAMI VICE PMT was seen in quite a number of blaxploitation films in the 1970’s. BOOK OF NUMBERS is nearly impossible to find but it’s one of the best blaxploitation films from the 70’s that I’ve seen and it’s one of PMT’s best early roles. The film is no holds barred in its depiction of African-American life in the 30’s in the South and the language and violence is fairly intense. It’s got great atmosphere, an interesting plot and lots of attitude (but when you’re fighting the KKK anything goes!) If you enjoy these kinds of films I’d definitely recommend this one, and especially if you enjoy PMT’s acting in MIAMI VICE, you’ll love him in this.