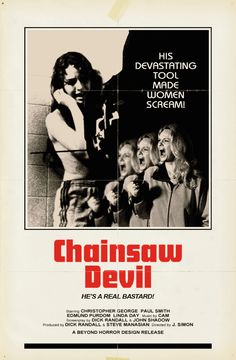 A strange slasher film with some very poor acting. Paul L. Smith wins the honours for worse acting in this daft gore flick but he is also the most entertaining as the very unhelpful gardener whose chainsaw goes on walkabout (why he never feels the need to lock it up to keep it away from the deranged killer is beyond me, but then again there are many points like this in this film). For such a big campus we have very few suspects, three in total (which includes the gardener who is ruled out pretty early) which get wittled down even quicker within the first 30 minutes leaving the viewer with only one glaringly obvious suspect, but never mind… How the murder gets around the campus with this chainsaw hidden is beyond me but there are some pretty neat hacking and dismemberment to watch and the piles of limbs left behind is quite comical. Speaking of which, we are subjected to a hilarious scene when undercover tennis playing police woman finds another victim in the changing rooms (this victim is sawn in half and the legs taken. She screams out “Bastard!” numerous times whilst clenching her fists, and then we have a random martial arts instructor kicking out at her in another scene for absolutely no reason..! There is a God-awful and stupid plot twist 20 seconds at the end of the film that makes no sense whatsoever and almost destroys what is a daft but fun addition to the slasher cycle.