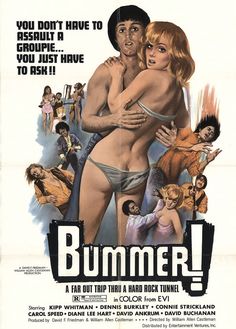 Boy was this BAD! Not good-bad just bad! Women are treated horribly in this film–in one particularly ugly sequence Barbara and Dolly are forced to strip and shower with each other while being verbally humiliated! Seriously…could anyone be turned on by something that sick? Also there is a long and totally pointless sequence in a strip club. Why is it in here? To pad the running time and shove more nudity in our face. Hilariously this film tries to show us that groupies are real, ordinary people deserving respect while shoving their nude bodies in our face! There’s even an uproariously bad romantic monologue showing the three couples frolicking in the woods while a lousy song plays in the background.

All the songs by The Group are lousy too–very bad 70s music. The acting across the board is terrible–only Carol Speed shows any ability at all. I was mostly bored by this and couldn’t wait for it to get over. I do have to admit I didn’t see the tragic ending coming–that provided a jolt but it was too little too late.