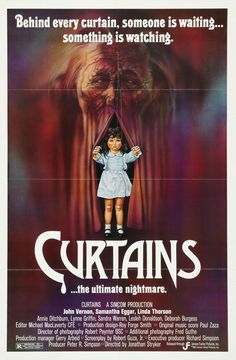 Curtains heralded the directorial debut of Richard Ciupka, a cinematographer that had worked on various cult-movies throughout the seventies and was the main camera operator on the excellent gialli, Blood Relatives from 1982. Peter and Richard Simpson, the Canada-based team responsible for Prom Night were the producers, marking their second joint venture into the kingdom of slash and explaining the healthy budget and strong casting decisions. It’s no secret that it suffered a nightmare production that was riddled with problems, which began when lead actress Celine Lamez refused to play a full-frontal nude scene a fair way into the shoot. She was consequently fired and blacklisted from working in Canadian motion pictures for four years. Linda Thornson replaced her, but obviously all the parts that had already been filmed had to be re-shot with the replacement, costing more money and putting a dampener on the set’s general atmosphere. After that, things just spiralled further downhill, resulting in various script changes and complaints from the financers that were unsatisfied with Ciupka’s work as director. (That came as a big surprise when I found out; I thought he did a superb job!) A lot of scenes ended up on the cutting room floor, which explains the studio stills showing screen-shots that never appeared in the final print when it was finally released after being shelved for three years. I’m fairly sure that some of the conspicuous plot holes that can be found throughout the runtime are most definitely resolved on a roll of film that’s stashed away somewhere in a Canadian office, waiting for someone to uncover and re-edit it into a ‘director’s cut’. Those sorts of on-set complications usually and quite understandably completely ruin most efforts that are unfortunate enough to be plagued by them. Just look at Steve Miner’s Texas Rangers. As a filmmaker, Miner usually always manages to deliver the goods, but after one too many accidents involving careless horsemen and an uninspired crew, it reportedly created an atmosphere of laziness’. The film was first rumoured to be unreleasable’, before it slipped out silently some months later and bombed like a dysfunctional torpedo. Despite all that worked against it, Curtains is still one of my favourite genre-pieces from the early eighties. Ciupka directs with an exquisite style and confidence, and Paul Zaza’s superb score creates a relentlessly foreboding environment that has rarely been matched to such a great effect.

The story resolves around a mysterious director that is trying to produce a film, which he feels soulfully passionate towards. Jonathan Stryker (John Vernon)’s lover and lead actress, the well-respected Samantha Sherwood (Sam Eggar), bought him the rights to the movie, in return for the lead role. She was hoping to play the central character, Audra, whom is an infamously psychotic and eccentric woman. Like the best Method actors, Sherwood discovers that research is the essential key to performance, so she fakes insanity to have herself sectioned into an asylum, so that she can become emotionally closer to the persona that she wishes to portray. Stryker visits her constantly at first, but as time goes by, he becomes concerned that the actress is looking a little too convincing and perhaps she really has gone doolally. So what does he decide to do, tell the doctor that it was all a farce and save the woman from impending delusion? Of course not, instead he just abandons her to rot with the rest of the whacko in the institute, and decides on a casting weekend at his remote New England mansion to find a new Audra! Hmmm, I’m betting that someone’s going to have to pay dearly for that endeavour, don’t you agree? The auditions consist of six actresses spending forty-eight hours away from civilization and undergoing vigorous dramatic examinations. Stryker himself sums the tests up perfectly, making himself sound like a military instructor, when he says, `The next two days will be unlike anything that you’ve ever seen before.’ All the women have their own unique talents, and they’re all attractive and unattached, proving that the crafty mogul has truly got his head screwed on correctly! When they all meet up over dinner for the first time, they discuss what lengths they’d travel in order to win – what would surely be – the role of their careers. The mood is decided when one budding thespian says that she’d …kill for the part’. The atmosphere gets all the more tense when Sherwood turns up unannounced and looks as if she’s going to do just that! As sure as night becomes day, a masked killer makes an appearance and begins working his way through the cast-list one at a time, leading me to believe that he’s auditioning for the crown of most creative slasher movie massacre inflictor! As is the thread with the multitude of genre entries from this point in the cycle, we have to decide whom we think is under that impressively creepy mask…

Curtains certainly has more than its fair share of noteworthy moments. The awe-inspiring second killing, which can best be described as skate and slash’, ranks alongside The Prowler’s late night swim’ as two of the best from the genre’s peak period. Christie (Lesleh Donaldson) sets out early in the morning, skates in hand, to practise her forte in the bright snow-laden woodland. She finds a fitting pool of ice and places her beat-box down, before treating us to a corny eighties love song and some visually credible skills that were indeed polished enough to rival those of acclaimed Olympic-twosome, Torvil and Dean! After a good couple of minutes watching her whiz around in circles, her performance is cut short, when the tape that she was listening too is mysteriously stopped. (It was a shame cos that cheesy old ballad was actually quite catchy!) She looks over to where the stereo is placed, but sees no one, so heads over to get a closer look. On inspection she discovers a bizarre and spooky-looking doll buried under the snow beside the radio. As she cleans the frost away from its woe-be-tired face, we see the first shots of the mysterious killer as he begins skating towards the hapless female from a distance. Christie looks up to catch the assailant charging in her direction, which is shot in superb slo-mo and backed with some perfectly orchestrated work from Paul Zaza. She soon realises that this uninvited guest doesn’t have her best intentions at heart, when he raises a scythe above his head and decapitates the dolly that she was clenching in her hands! After an apprehensive pursuit through the snow-coated trees and an unexpected jump-scare, lets just say, that the world has one less season ticket holder to the local ice rink! It truly is a brilliant experience watching the superbly deranged psychopath in the old-hag mask skate up in slow-framed shots, while the victim struggles to make sense of the situation. The tension was literally impeccable and Donaldson’s decent performance as the petrified youngster made it all the more realistic, somehow. You’ll be hard-pushed to find a more memorable sequence anywhere in slasher cinema. It’s genuinely terrifying.

The final chase was equally as suspenseful, utilising a superb use of lighting and claustrophobic trappings to create a fitting final to a competent offering. The prop-room location gives Ciupka a chance to shine as he makes the most of his previous experience, chucking in tonnes of striking moments. These include, flashing lights revealing the killer hiding in the back of a beaten up Mini, then disappearing when the camera returns, and the quick cuts through shots of strung up mannequins (and even a corpse), which are accompanied by the dieing screams of an unfortunate female. The patent credibility allows this to stand alone as privileged to possessing its own unique environment that separates it from the rest of its production-line counterparts. It’s hard to describe, but Curtains has a matchless ambience that remains unparalleled, even today. It’s hard to maintain whether it’s down to the constant haunting shots of spacious corridors ending in spooky bright lights, the above-average editing or Zaza’s terrific score, but one thing is for certain, it’s definitely huge on atmosphere all the way through. Even the weaker points of the feature aren’t all that bad, although admittedly, the artsy ballet scene and the rape sequence were overlong, somewhat random and fundamentally inexplicable.

Another bonus is the good work from the cast, which is filled with actors that have more undiscovered talent than any kind of reputation or A-list credibility. John Vernon makes a competent – if a little theatrical lead, earning kudos for expelling any pleads for sympathy, while Eggar does a good job as the essential red herring (or is she?). But it’s Lynne Griffin that really steals the show more than anyone else does. The dynamic little Canadian actress gets the chance to make up for her disappointingly brief role in Black Christmas, in which she spent most of her screen-time playing a corpse in the attic, with a bag over her head (no fair!) Here, she gives a fantastic portrayal, switching between emotions of anxiety, fear, insecurity and anger, even taking the time to include a stand up comedy routineseriously! I’ve already mentioned the tremendous use of music, but it’s also worth noting the final piece that plays over the end credits. It’s a beautifully composed melody that makes the most of the talented musicianship that was on offer.

The flaws are all mostly due to the problematic production. Even though we’re unable to tell exactly how much the shoot was affected by the unfortunate occurrences, Ciupka having to use a pseudonym when the film was released proves that it certainly wasn’t a rose garden. Some of the characters are far too under developed and one or two of them even remain nameless. It’s impossible to pick your choice for surviving girl, because not one of the actresses was on screen long enough to display their individual characteristics, which also had a devastating affect on the mystery. It is a surprise when the killer is revealed, but to be honest, it could have been absolutely anybody, we’re not offered any real clues or motives. What’s really needed is a total rehash of the picture from the raw footage or the dailies’ – so to speak, so that we can get a true look at how it really should have been. Anchor Bay has worked wonders with movies like Maniac, Terror Train and Dawn of the Mummy, putting them to DVD with commentaries and decent extras. It’d be nice if they could raise similar interests to get this flick redeveloped with a commentary explaining exactly what’s missing and why. Unfortunately, it’s doubtful that anyone would bother funding such an exercise for an effort that wasn’t all that successful in the first place. What we’re left with, is a half-finished print that still manages to kick up one hell of a storm. Turn the lights down low and prepare to enjoy this decent offering with some of the most plausible directive decisions since Halloween first surfaced in 78. The evident brilliance easily outshines the few not so good moments and that one aforementioned murder alone, redeems the often budget-friendly asking price. I say give this one a go, it certainly gets my vote and is probably a good contender for the all time slasher top-ten.