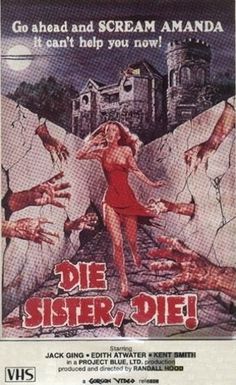 It’s not hard to see why some viewers might mistake this for a TV movie, for it does have that sort of feel, except spruced up a little bit with mild use of gore. The story is nothing special, and in fact is pretty familiar, but it does entertain: the dialogue actually isn’t bad, and the performances are definitely solid. Written by Tony Sawyer (based on a story by William Hersey) and adequately directed by Randall Hood, it doesn’t exactly offer any surprises as its twists are revealed, but one could still do far worse than this.

One thing that does it make worth watching is the work by Edith Atwater (“True Grit”, “Family Plot”), who’s affecting as the haunted Amanda Price, who’s attempted suicide as the movie opens. Amanda’s younger brother Edward (Jack Ging, “High Plains Drifter”, “Sssssss”) hires a woman named Esther Harper (Antoinette Bower, “Prom Night”, “The Evil That Men Do”) to be the supposed nursemaid and companion to Amanda, but he really wants to convince Esther to let the old woman kill herself so they can split the family estate. As it happens, Esther comes to like Amanda as she gets to know her, and doesn’t really want to contribute to the woman’s death in any way.

Fine supporting performances by Kent Smith (“Cat People”, “The Spiral Staircase”) as the family doctor and Robert Emhardt (“The Intruder”, “It’s Alive”) as the deceased patriarch (seen in flashback) are an asset, and the music score composed by Hugo Friedhofer is very good as well. Ging is appropriately smarmy and Bower does alright as the troubled accomplice. The movie’s pace is acceptable and Hood manages to keep the viewer watching through the assorted twists and turns. The ending is basically satisfactory.