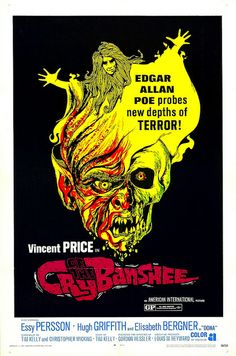 Lord Edward Whitman(Vincent Price) is a wicked magistrate who why while not believing in Witchcraft, delights in accusing peasants of the crime. The punishments he dishes out are not always within the law though. Working On a tip off, his men kill many within a coven of witches, the witches leader Oona swears revenge and pleads with Satan to send her an Avenger who will smite him and his family. Such an avenger is the mild mannered stable hand Roderick(Patrick Mower), who was found as a child in the woods and brought up by the Whitmans, around his neck he wears a strange and ancient medallion of unknown origin.

Gordon Hessler has a mixed filmography in Horror, this on the face of it, is a production designed to take advantage of Michael Reeves’s Witchfinder General, as wonderfully hammy Vincent Price and the beautiful Hilary Heath, both return, as does DP John Coquillon, who adds oodles of atmosphere and energy with his ever moving camera which captures the location work beautifully. Hessler learnt his trade with Hitchcock and to some extent it shows in this film, he knows when and where to provide the scares. The film itself was much rewritten and Hessler found himself getting further away from the theme of the title which had already been sold as a Banshee film before filming began, but he was reigned back in by the producers, the meddling doesn’t quite ruin the film but it does have a lot going on plot-wise, as a result. The witches coven send a “Sidhe” an ancient derivative of the banshee in the form of Patrick Mower, (his make up none to convincing) to kill one by one, members of the Whitman family, not all of which are bad, some are very decent people, this effective ploy is also used with the witches, making it hard to take sides or see who the really bad guys are. Fans of period Brit Horror shouldn’t be disappointed, there’s copious nudity and plenty of buxom wenches that make for pleasant viewing, there’s also an excellent sting in the tale.