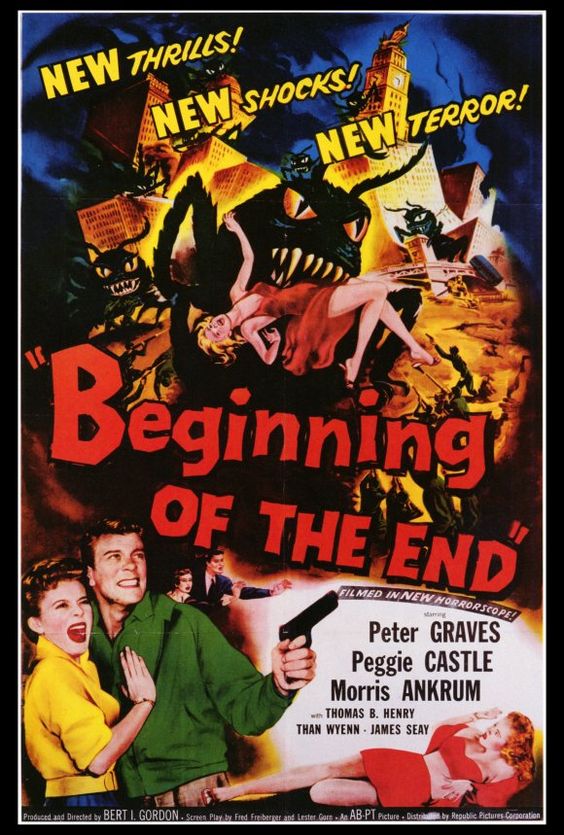 This is one of the most enjoyable of the 1950s “big bug” movies. Filmed in 1957, in the middle of my favorite sci-fi era, this film enjoys a better than average cast than you would expect for B science fiction.

People begin to disappear in the surrounding communities outside Chicago. Photographer/journalist Audrey Aimes, portrayed by the lovely Peggy Castle, stops to visit Dr. Wainwright, the Dept. of Agriculture scientist who has used radiation on his plants to make them larger, only to discover that grasshoppers have feasted on them, thus making an army of giant sized locusts. This sounds pretty lame by today’s standards but this was standard fare for 1950s science fiction, in the days when we were scared to death of having a nuclear weapon dropped on us and being taken over “from within.”

After the discovery of what has happened and why, the rest of the story deals with what to do before the grasshoppers destroy Chicago. Fortunately for all, this did not happen. I won’t give the ending away be will provide a hint: View 1963’s Day of the Triffids.

Reviewers have not been kind to this film and perhaps rightfully so. However, within the context of the preposterous story and extremely limited budget, its not so bad. Beginning of the End starred Peter Graves, a sci-fi regular of that time in his pre-Mission: Impossible days and whose brother, James Arness, was riding high as Marshall Dillon in television’s Gunsmoke. (You may recall that Arness starred in 1954’s Them!, about huge ants terrorizing Los Angeles. This was the film that started the big bug craze). Peggy Castle was cool and calm as the female lead and was a forerunner of sorts to today’s’ strong woman in action films. And, this was yet another film of many whereas Morris Ankrum played a military general.

Special effects were not too good even for that era and are downright atrocious by the standards of today. We see grasshoppers walking upon photos of various places in Chicago and the super imposed shots are of very poor quality. The storyline stretches even the keenest imagination, as we are led to believe that Chicago can be 100% evacuated within 24 hours, and this with thousands of homeless refugees from the outlying communities camping out in the inner city!

Even so, Beginning of the End possesses the low budget charm that subsequent eras have not been able to duplicate. This is one of those films that is fun to watch and is the sole reason one should do so. Saturday night late is the best time. I like to view it alone and recall a far simpler time in my life and our world at large. At least, the times seemed simpler. Perhaps they were not and that may be what films such as these were all about.