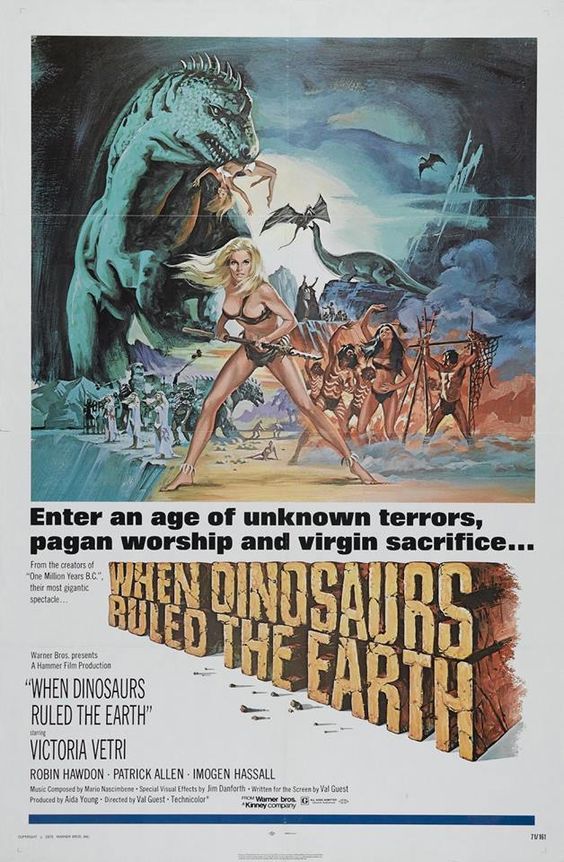 “When Dinosaurs Ruled the Earth,” like its predecessor “One Million Years B.C.” was one of those great movies when I was a kid that helped ease my transition from comic-book-reading, baseball-card-collecting dinosaur geek to comic-book-reading, baseball-card-collecting chick freak. I was seven when it was released, and I still remember the TV airwaves saturated with advertising. I whined and screamed and begged my brother to take me, and he did. Great part was, we caught this flick as part of a double-feature with Harryhausen’s “Valley of Gwangi.” Eat your heart out, stop-motion animation fans!

Perhaps because of the great childhood experiences surrounding this movie, there’s a kid-voice in my head that still sees it as near-flawless cinema. But in all honesty, it’s just G-rated exploitation in the purest sense of the word. The dinosaurs in the movie promos draw the young boys in, and once their behinds are in the seats they slowly become less cognizant of the prehistoric beasts and more cognizant of the way Victoria Vetri’s cave tunic gives her breasts that extra lift or the way her legs seem to be constantly shimmering with sweat. Even at seven I noticed this, which is why “Dinosaurs” provided a great transition into puberty for me half a decade before it actually hit. A lot of fun, this, but don’t mistake it for art. Watch it for the beasts and the (scantily clad but not naked) boobs, toss in a bag of microwave popcorn and a few beers. It may be G-rated but it’s still kind’a fun.